Winners Announced: $500 of PSD to HTML Conversion Up for Grabs 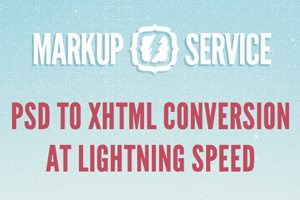 We’re excited to launch a new competition today, giving you the chance to win one of two awesome markup packages, courtesy of Markup Service! It’s a great way to speed up development on time-sensitive projects, and you can be confident that the end result will be of a highly professional standard.

Read on to find out how to enter the competition, and get your hands on $300 credit for your own markup requirements!

We’re pleased to announce that the lucky two winners are:

Thanks to everyone who took part, and to Markup Service for sponsoring the contest!

We have two prizes up for grabs, designed to be as flexible as possible for you. Rather than offer a specific type of markup conversion, we’ll just credit your account with Markup Service with the prize value for you to spend however you’d like:

You could on a regular PSD to HTML conversion, or on something more complex such as an email or CMS template (they can handle WordPress, Joomla, or Drupal).

It was a pleasure to work with the Markup Service team while creating a few of our own projects, and you can check out more examples of their work here.

Just entered a competition to win a PSD to HTML conversion courtesy of @designshack and @markupservice: http://bit.ly/H2rRFj

We’ll be picking the winners in exactly one week, and you’ll be notified via email (so be sure to leave a valid email address with your comment).