Design Dilemma: Who Owns My Design? 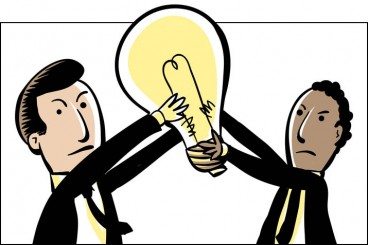 Our designs are our babies, otherwise we wouldn’t care how clients change them. So, every now and then, the question arises between designer and client as to who owns the files and rights to a design you’ve done.

This time around Case: 123ABC sent a question about retail signage he did. The client wants to be able to own and modify it at will (without him), but he’s afraid it will look horrible and reflect badly upon his professional reputation. Naturally, the client doesn’t want to pay to buy all rights to the design… or do they already own it? Join us as we delve into another mistake-laden Design Dilemma, helping to answer your questions, queries and concerns about the murky world of design.

I need your advice on a situation here that has been rotting a hole in my desktop (and psyche) for several months now.

I know I should have done up a contract for this one, and I didn’t. I admit my stupidity and I vow to learn from it! In the mean time, help!

My client wants to modify a rack card I created for them which contains a schedule that changes several times a year. The client wants to update the schedule and reprint, throughout the year, on their own, without (paying) me. The client tends to be sloppy and make a lot of spacing and spelling errors. Am I vain to not want my name ANYWHERE NEAR it?

Here’s another piece to it — it’s a unique design that I don’t want being used by others. I’ve used similar lay-out for another client as well. Am I being childish, or would I be an idiot to allow this to happen? The current client is saying that they have a business to run, and insisting that it’s their right to do whatever they please with something they have paid for.

It’s been suggested I charge this client an extra fee for the rights to use my design as he/she pleases, but the fact is, that I just don’t want to give it away, at any cost. Sooo,  I say he/she has to pay me to update it, or pay another designer to copycat the product, or…. eek. What a headache! I have never encountered this situation before, and have been designing for several years.

Thank you for your advice.

What is the Client Buying?

This is one of the biggest conundrums to arise between designers and clients. In fact, I’m tired of hearing it because it’s all contractual. Legalities aside (and I’ll get back to that later) If I had to choose the easy answer, it would be for all creatives to understand that design, as a service industry, is usually work-for-hire. The client owns everything and, of course, should pay for everything.

This is one of the reasons corporations pay seven to eight figures (in U.S. dollars) for an iconic logo — the corporation doesn’t want any surprises down the road. They want to know they own the logo, can do whatever they want with it and no one will pop up in a few years and sue because the new logo is just like an existing one. It happened to the National Broadcasting Company (NBC) a couple of decades ago and it was a public relations nightmare.

“Rights bought now include universal rights, electronic rights, marketing rights, and everything else. Most transactions are all rights and should pay for that ownership. “Should” is the magic word.”

So, let’s say you have no contract, just a verbal agreement that might be referred to in an email or two, and you are of the mind that you will retain all rights to your design and are only selling one usage right to the client. Listen to how that sounds when you read it aloud. Do you think that a client doesn’t expect they are buying all rights and files to work they are contracting to you?

They put it in the same category as paying a plumber to put in a new bathroom (except they respect the plumber a lot more than they do you). If the plumber said he/she would still be able to tell the client what colors they could and couldn’t paint the bathroom and that the plumber would be the only one who could use the toilet, the client would find another plumber.

Perhaps we are too bombarded by confusing legal rights preached by large creative organizations that have to publish more general contracts (try Docracy for good, free contracts for freelancers) for members and these, in turn, are taught to students? While the sale of first North American reproduction rights has been a standard for images illustrators and photographers sold to magazines and newspapers for decades, rights bought now include universal rights, electronic rights, marketing rights, and everything else. Most transactions are all rights and should pay for that ownership. “Should” is the magic word.

Oops! A Contract is a Legal Necessity

Another tripping-point of not having a contract is that the copyright law states that the copyright can only be transferred in writing, so, Case: 123ABC is in luck as far as legal rights but not in terms of the client going atomic at the thought of being “blackmailed” (that’s what they’ll think) for more money. If you are done and over with that client, then demand more money but expect to not be liked by them.

“As I always say when someone reminds me that a contract or expecting contractual pay isn’t going to make the client and I “friends,” I always snap my fingers in frustration and say, “darn, another birthday Facebook post I won’t be getting!””

As I always say when someone reminds me that a contract or expecting contractual pay isn’t going to make the client and I “friends,” I always snap my fingers in frustration and say, “darn, another birthday Facebook post I won’t be getting!”

There have been many times when a prospective client will insist on no contract and when I bring up copyright transfer, he/she will shrug it off until I remind them that I could go insane very soon in the future and sue them for using my copyrighted material. Then I laugh maniacally and they are more willing to look at a contract.

The people who write into Design Dilemma are usually told ad nauseum about contracts. If you are in business, then get used to the paperwork (even though it should all be digital). It’s easy and anyone who won’t accept a contract, purchase order, design engagement or sales form (whatever you label it to cushion the blow/hide the shame of being professional) is just trouble waiting to happen.

Can Case: 123ABC do anything at this point? I’d say let it go, don’t put it in your portfolio (if you should have 8-12 strong pieces in your portfolio, then what will one piece matter?) and be glad your name isn’t on it. Take the money and run. They might call you for more work in the future and in the end, it’s about making a living as a designer and not letting your art starve you to death. Learn to let go.

After I sent off this answer to Case: 123ABC, I received this message back:

I found resolution with my client by presenting a couple of articles and forums on this topic, and proposing for her to hire me to create a new product that does not use the template I am recognized for having created here in my home town. She accepted, and I made a brand new contract for myself, including usage and ownership rights. Glad for all this learning. Below is what I sent to my client.

All the best, until next!

Regarding the rack card, I have done some more research and learned some terminology for what we are talking about (intellectual property, ownership and usage rights, work for hire, transfer of source files …). The debate looks to be pretty epic and ongoing. Holy scheize, we are not alone!!!!!

The debate is well-represented here, in the comments for this post. There are comments there that express both of our points of view in this quite well, as has been reflected in the information from each of the professionals you and I have already consulted with.

Most standard graphic design contracts I can find have a section specifically for ownership and usage rights, which are agreed upon prior to commencing the work, and which cost more money for the client to obtain. Where there is no contract, digital files are handed over to the client, completely and solely at the creator’s discretion.

I’ve used the rack card template for two studios now, here in the Valley, over the course of the last 3 years. It touches the arena of intellectual property and actually, the idea to squeeze a calendar onto a card came from Lynn, so that is a whole other can of worms. I don’t want someone else editing a creative product of mine because I don’t want to be assessed professionally for decisions I would have made differently / mistakes I would have corrected. I have the right to impose upon my creative work, and be known for, my own knowledge, skills and creative values.

Considering this, and the fact that we have no contract in place for the rack card (big fat oops), here are three possible ways to move forward:

I was happily flabergasted! Case: 123ABC had successfully negotiated a suitable agreement to all parties. In the future, maybe people could describe the client’s emotional state and personality type when writing in. Then I can access the chances of negotiation a little more.