The Web Design Survey 2012: The Results Are In! 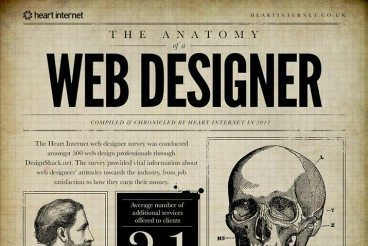 For the second year running the Heart Internet web design survey, conducted by Design Shack, has given us some valuable insights into the attitudes of web design industry professionals.

Thanks to everyone who took part (all 500 of you), we can start to build a picture of what web designers in 2012 think about their work, where they think the industry is headed, and how they do business. Read on to find out about the results of the survey, and what the landscape of web design looks like in 2012!

“the industry still has a strong sense of independence”

Starting off by looking at employment, the survey shows that 62% of you are either freelance or self-employed. Compared to 2011, there has been a 9.2% increase in web designers going it alone in the past year. Less than a quarter of you are full time employees at a company, with the rest making a living through agency work (14.8%). What this tells us is that the industry still has a strong sense of independence with designers wanting to make their own mark on the industry.

As for the most popular method of charging for web design services, the most common approach was to use a combination of hourly rates and flat fees. 27% of you said that they billed their clients this way, whilst just 12% said that they charged purely on an hourly basis.

Naturally, working for yourself means that attracting new clients and work is of vital importance, concerns that were echoed in the survey. 4 out of 5 of you agreed that work was either more difficult, or just as tough to find in the last 12 months, with a further 3 out of 4 of you predicting that work will be no easier to come by in 2013.

This gloomy forecast continued as 79% of you agreed that the price for web design is falling with increased competition in the marketplace. Compared to 2011, we can see an 18% rise in web designers saying that intensifying competition has led to shrinking prices.

Another statistic from the survey that shows the difficulties that web designers are facing is that 88% say that their clients often underestimate the cost of web design. Through other research that we have conducted, we have found that 80% of small businesses say that a new website should cost less than £1000 ($1592), clearly showing the difference of opinion between professional and client.

Stats like these are unsurprising given how much current media coverage is given to the stuttering global economy, leading to the cautiously pessimistic stance that people from any industry take. However, by recognising that work might get tougher to find in the next year, web design has begun to make provisions.

Web designers are attempting to overcome the challenges of increased competition and failing prices by offering more services.

You told us that web designers are offering their clients an average of 3.1 additional services. This is another rise in comparison to 2011 where web designers were providing 2.31 added extras. The top three bonus areas in which web designers were looking to seal more custom were website maintenance (19.83%), web development (19.14%) and SEO (13.18%).

Web designers also appear to have faith in the industry and their chosen career, with 77% of you saying that you are confident overall about job security. This is an interesting contrast to the earlier results about the difficulties of finding work, suggesting that the industry sees it as healthy competition rather than an over-saturation of the market.
More competition however creates the need for versatility and a willingness to grasp new trends to attract clients.

The Growth of Mobile

Due to the current popularity of gadgets like tablets and smartphones, it is no surprise that 9 out of 10 of you said that demand from clients for mobile and tablet optimised websites has increased. However, less than a third of you said that you always plan mobile versions of the sites you build, suggesting a slight reluctance to embrace this medium.

A further 1 in 5 of said they would never consider taking part in competition spec work. This, coupled with the 82% of you who have never done any competition spec work, demonstrates how certain corners of the web design community still feel that spec work is, from an ethical perspective, damaging to the industry.

Our survey has highlighted some of the major concerns for web designers, not least the problems of finding work and making a living in an increasingly competitive marketplace. Despite this slightly pessimistic outlook, there was plenty to be encouraged about in this year’s survey.

More designers are going it alone, showing that the industry is maintaining its sense of independence despite the state of the economy; and more of you are offering additional services, demonstrating the entrepreneurial spirit of web designers.