Feedback From a Theory X and Theory Y Perspective

This article is for both designers and clients/employers. I have been on both sides of this equation so I know how it feels to give feedback as well as receive it and I firmly believe that there is a right and wrong way to go about each task.

Today we’ll look at both sides of the coin and discuss how employers can motivate the people working for them to meet necessary goals and how designers should react in the face of both constructive and destructive criticism.

As we’ll see, designers and managers are often equally guilty of approaching the problem of feedback in a poor manner. While abusive managers do exist, designers tend to unnecessarily wear their feelings on their sleeves and take offense too quickly.

We’ll start things off with a little Business101. Back in the 1960s companies were becoming extremely interested in how to become profitable through enhanced manufacturing techniques and improved employee motivation.

Consequently, both of these became and remain major topics of study in management theory. The latter sparked a popular theory by a professor at MIT named Douglas McGregor. 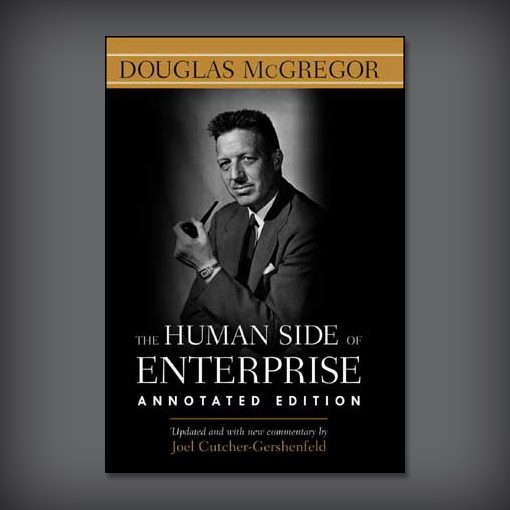 McGregor observed that mangers generally fall into one of two categories when it came to employee motivation: he labeled these approaches Theory X and Theory Y.

Theory X managers believe that workers are inherently lazy. Without close supervision, strict rules, and hard punishment, productivity simply won’t happen. Workers will take every opportunity they receive to slack off and perform well below their potential because they are primarily concerned with putting forth the least amount of effort possible to receive a paycheck.

One key aspect to Theory X management is that people are the first to blame, not processes. If something isn’t working, rather than examining the process to see how it could be improved, it is directly assumed that the employees are at fault and should be observed, reprimanded and even fired.

Theory Y managers, by contrast, believe that many or even most workers genuinely want to work and can find satisfaction and fulfillment in performing their duties. Under Theory Y management, employees are usually given more freedom and trust with the hope that the result will be happier workers who are more inclined to go the extra mile to ensure productivity.

When problems arise under Theory Y management, the employer and the employee attempt to examine the issue together as a team and examine where both people and processes could improve.

Obviously, Theory X and Y are extremes. Most real world managers show tendencies from both categories but it is still quite possible to analyze a particular style of management and decide which end of the spectrum it falls closer to.

It’s tempting to think that Theory Y management is good and Theory X is bad and it is indeed the case that modern business schools and studies lean towards Theory Y being the better of the two, however it is important to note that a position of leadership will bring about circumstances where Theory X style enforcement is a necessary and appropriate response. Lazy employees do in fact exist and are a drain on productivity and company resources.

It is also important to point out though that Theory X is easily taken too far, the result of which is destructive and belittling communication.

What does any of this have to do with today’s topic? The answer lies in how feedback is approached and how people tend to respond to different types of feedback.

Whether you’re in a freelancer/client relationship or an employer/employee relationship, the model of communication is similar: one party or group instructs another to meet a specific goal and provides correction where needed.

When you examine the work of others, ask yourself where you fall on the XY spectrum. Are you more Theory X or Theory Y? And be brutally honest with yourself or the entire exercise is meaningless.

How do you respond when you see work that isn’t what you expected or requested? If you immediately conclude that the person performing the work is of an inferior intellect and quickly resort to speaking derogatorily to them, you’re a Theory X manager.

If, on the other hand, you begin to honestly examine the situation and to determine what went wrong, you might tend towards Theory Y management. This point of view would examine your own communication as a point of possible error in addition to other factors such as process inefficiencies and eventually employee error.

Generally, from the outset of a project, it’s a good idea to approach management from a Theory Y perspective (even if your tendency is toward Theory X). Give the people you’re working with some credit and believe that they genuinely want to do a good job. When things go wrong, examine all the factors and take appropriate actions with a positive attitude and an encouraging tone.

You don’t have to baby the people who are working for you, but you do have to remember that they are human beings that deserve the respect of being treated as such.

If problems persist and you notice that work is actively being avoided or approached halfheartedly, then it may be time to adopt a more Theory X approach. Note that this doesn’t mean resorting to belittling comments and ad hominem attacks! It simply means that you shouldn’t live in denial of ineffective workers and must take steps to either push them into action or replace them.

There are many people, especially in cultures outside the US, that respond much better to Theory X management. Sometimes a kind, forgiving boss simply isn’t respected in lieu of a strong and powerful leader.

The key is to be a good enough manager that you can effectively take on either style when a situation calls for it. The adaptive manager beats out both the stern and understanding managers every time.

Theory Y managers are obviously the easiest to handle. Since their style of directing is encouraging, it only becomes a problem when it’s noticeably disingenuous or ineffective with the team as a whole. Much more difficult to receive, from a feedback perspective, is a strictly Theory X approach.

Though many managers fall somewhere between the two extremes, I worked for a manager for years that was extremely Theory X with hardly a Theory Y tendency in sight. In fact, this person was a prime example of what many call a toxic leader.

This person would was always enraged when reviewing designs. There was open disgust with every project presented and attacks on the team’s intelligence and experience as designers were always close behind. Work was never examined from a honest perspective. If this manager asked for a certain typeface, it was quite often the case that upon seeing it, the manager would deny every suggesting it and berate the designers for choosing it.

As a designer, when the person providing you with feedback is constantly so angry as to be incoherent and so inconsistent as to seem mad, little can be done. Obviously, the best option is to find a different employer or client but we all have mortgages and this isn’t always a realistic solution, at least in the short term.

It is often the case that stern leaders are looking for push back. They want strong-willed workers willing to stand up to them and won’t respect anyone who cowers from reproach. My advice is to never let anyone deny your basic humanity. You are not a lowly pet to be scorned.

Remember that you teach people how they are allowed to treat you. This is especially true in a freelance environment where you are much more of an equal with your client and have complete freedom to do a little firing yourself.

As designers, we tend to create emotional bonds to our work. When we’ve poured ourselves into a design any negative feedback feels like a personal attack.

I frankly think that too often designers are a bunch of pansies that become offended far too easily. Design is a subjective art and just because someone doesn’t particularly like one of your designs doesn’t mean that they’re suggesting that you aren’t good at what you do.

Just because someone is open about not liking your work doesn’t make them a toxic leader, just an honest one. The test is to see if they are reasonable in their conclusions and can provide clear feedback about what needs to change.

If your employer can provide this, then you shouldn’t have much to complain about. First drafts are called that for a reason, don’t expect to nail a bullseye with every shot. Rather, know that your first attempt is merely a guess interpretation of the request that can then be molded into what it is that the client wants.

Don’t take up the poor abused designer argument until someone really begins attacking you as a person.

To sum up, Theory X and Theory Y styles of management each have their place. The key to being an effective manager is not to cling to one style over another in all situations but to learn to analyze a situation and adapt your style of management accordingly. Regardless of which style is used, feedback, whether harsh or gentle, should be provided with respect and common decency. There is simply no use for personal derogatory attacks.

As a designer, receiving feedback is always going to suck, though it admittedly sucks less from an encouraging and understanding manager or client. When possible, ditch toxic leaders or begin to show them how you expect to be treated. Just remember to avoid getting defensive and offended when what you are receiving is honest and clear feedback.

As with most managerial theory, some of this may seem a bit obvious. However, the world is wrought with horrible managers and horrible receivers of management, stuck in denial and blaming everyone but themselves. The purpose of this article is to encourage you to take an honest examination of your situation no matter which side of the management line you’re on and to attempt to adjust your behavior appropriately.