Mastering Markdown: 30 Resources, Apps and Tutorials to Get You Started

If you’re like me, learning Markdown has been on your todo list for months. I finally took the plunge and instantly became addicted to sorting through the wealth of resources, apps and other Markdown related materials available.

The following is a collection of the best Markdown resources that I’ve found. Whether you’re a complete Markdown newbie looking to learn the syntax or a seasoned expert in the market for a new iPad app, you’ll find something here that’s perfect for your needs.

Markdown is a markup language that was created by John Gruber to simplify the workflow of web writers. Many bloggers, like myself, usually write our posts in straight HTML, which can be cumbersome and difficult to read through. Markdown provides a much simpler and easier to read alternative that can easily and instantly be converted to HTML using any number of free tools.

If you’re a writer and you constantly use HTML, Markdown is for you. If not, you might just find it to be absolutely useless. I personally really like the syntax and find it to be quite intuitive. Take a look at the resources below and see what you think!

Here’s the gist on Markdown straight from the source. Gruber introduces the concept, outlines its use and syntax and even provides a Pearl plugin that works with Movable Type, Blosxom, and BBEdit. 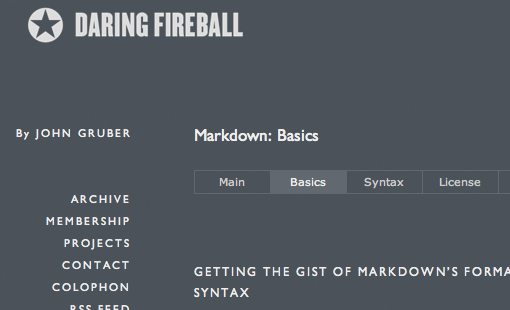 Normal tutorials are boring, check out this interactive tutorial and you’ll pick up the Markdown Syntax in no time. You will be editing the actual text of the tutorial, adding Markdown elements as you learn them. Markup elements are reused throughout the tutorial in order to ingrain the Markdown that you’re learning. 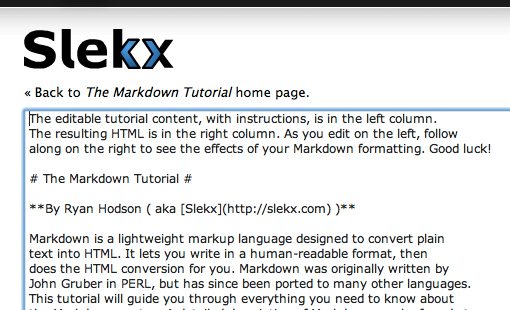 This is a super short and simple introduction to Markdown without all the fluff. If you have at least a double-digit IQ, you can probably pick up Markdown in under two minutes by browsing through this tutorial. 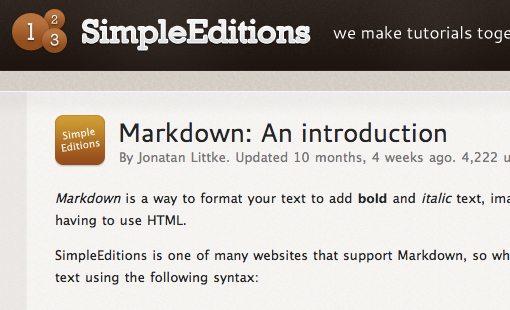 If reading makes your eyes sleepy and you prefer a video tutorial, here’s one from Stevan Wing. It’s a really in-depth look that walks you through the concept, syntax and implementation. 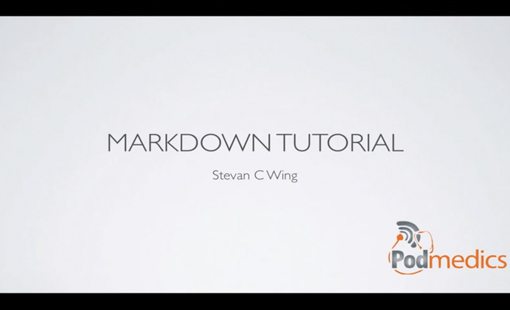 MMD is a superset of the Markdown syntax. It adds multiple syntax features (tables, footnotes, and citations, to name a few), in addition to the various output formats listed above (Markdown only creates HTML). Additionally, it builds in “smart” typography for various languages (proper left- and right-sided quotes, for example). 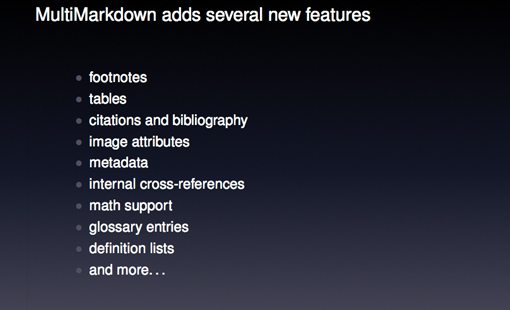 A GitHub hosted guide to the markup syntax used in the MultiMarkdown system. 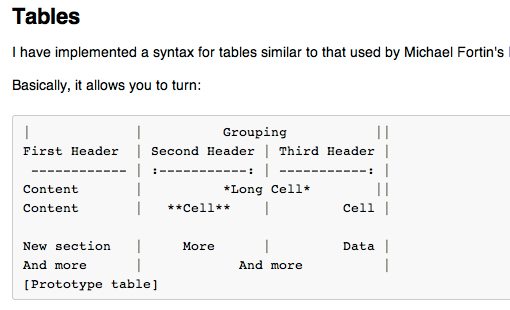 A short sheet of the Markdown, Markdown Extra, and SimpleLink syntax. 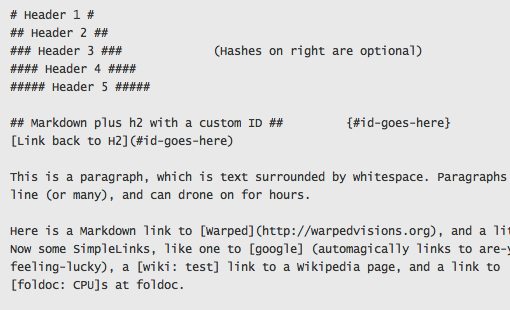 This web page contains a bunch of nicely formatted tables that showcase examples of Markdown syntax and the resulting output. 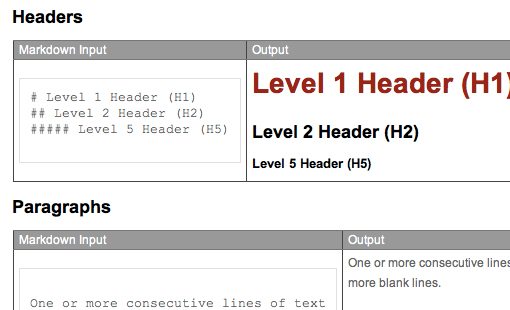 A simple, no frills Markdown reference sheet from Squarespace. 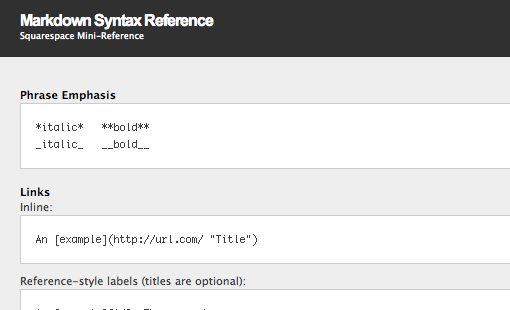 Instead of a web page, this one comes as a PDF that you can download. As you can see below, it has an interesting dark visual theme. 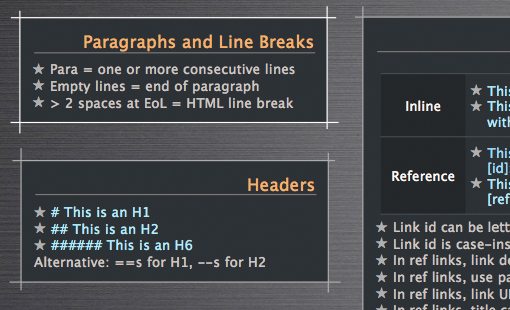 If you didn’t like the dark theme of the previous PDF, here’s one with a much simpler, more typography-driven design. 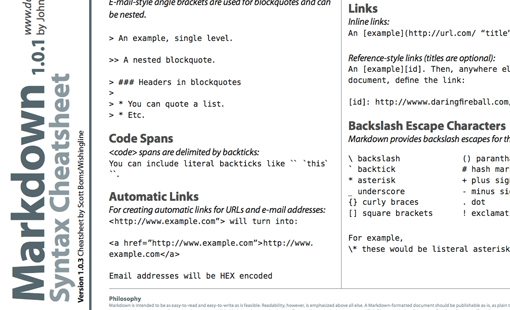 A dense but nicely organized cheat sheet perfect for printing as a desk reference. 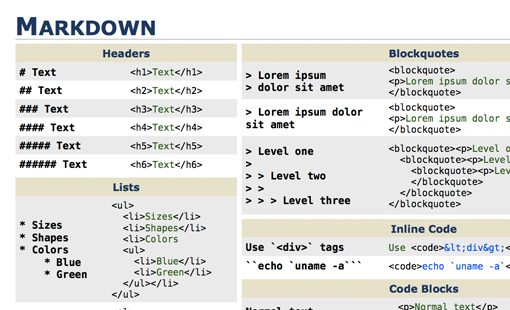 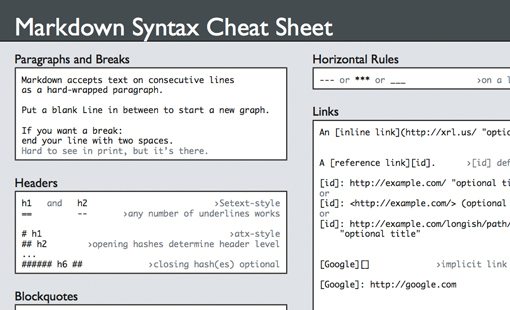 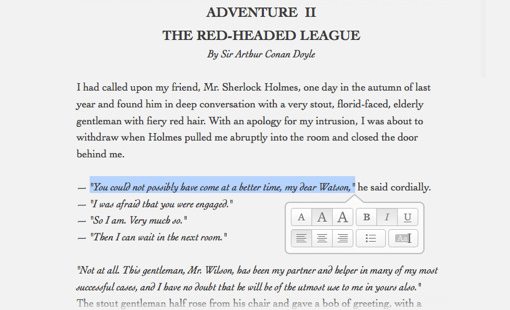 Marked opens MultiMarkdown, Markdown, Text or HTML files and previews them as HTML documents. It watches the file for changes, updating the preview any time the file is saved. With a full set of customization options and preview styles, Marked adds an ideal “live” Markdown preview to any text editor. Marked is $2.99. 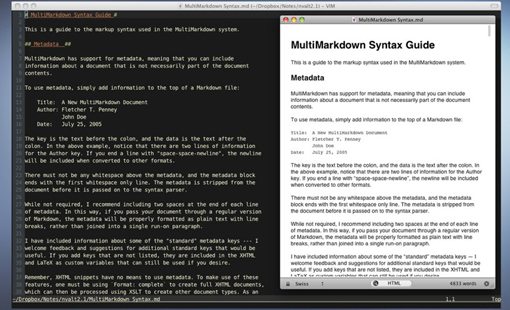 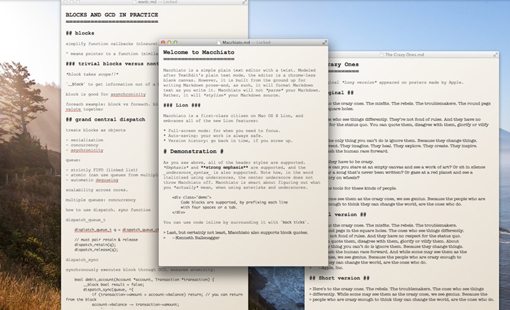 MarkMyWords is a powerhouse of functionality for Markdown users. It’s not the prettiest app out there but it’s by far the most fully-featured Markdown client I’ve ever seen. MarkMyWords is $24.99. 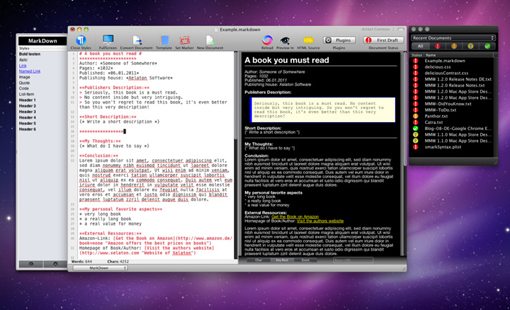 IA Writer is one of the best apps in the full-screen text editor genre. The interface is gorgeously simple and the app has some excellent auto Markdown functionality built in. IA Writer is $9.99. 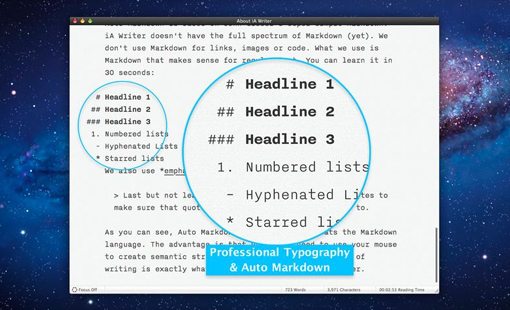 nvALT is a fork of the original Notational Velocity with some additional features and interface modifications, including MultiMarkdown functionality. nvALT is a free download. 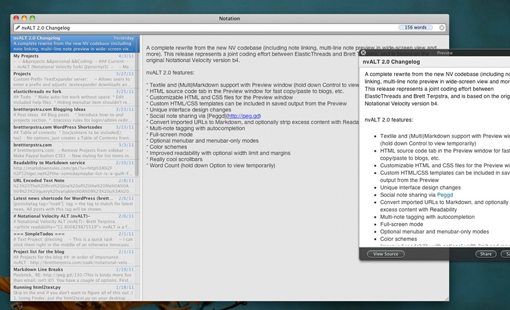 Elements is a dedicated Markdown and Dropbox powered text editor for iOS. Elements allows you to view, edit and share plain text documents on your iPad, iPhone or iPod touch. All of your data is stored in a folder on your personal Dropbox account so that it’s accessible from any device you have. Elements is $4.99. 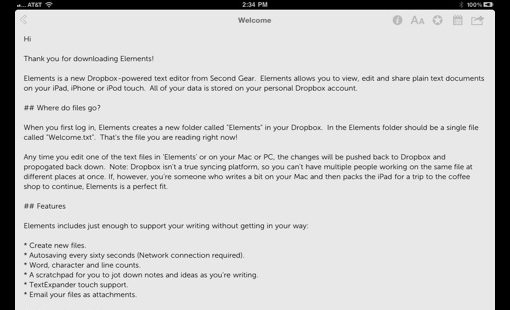 With integration to Dropbox, Markdown, and a text editor, Nocs lets you work with your documents on any iDevice. Nocs is $2.99. 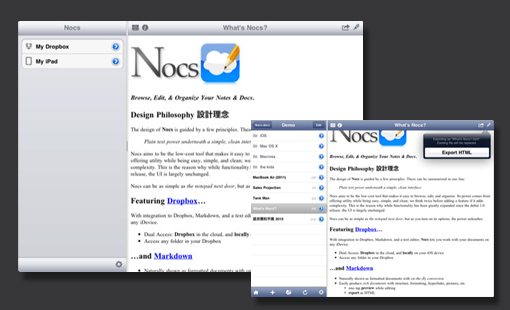 Link to Dropbox. Write Markdown-formatted text. Use your favorite TextExpander snippets. Do quick research to find reference materials. Insert quotes and links into your documents. Upload images to CloudApp. Export your writings as Markdown or HTML files. Do all this and more with this awesome iPad text editor. WritingKit is $4.99 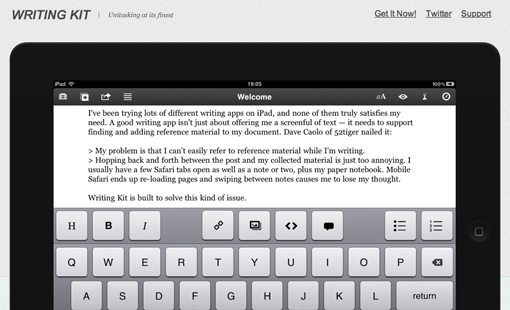 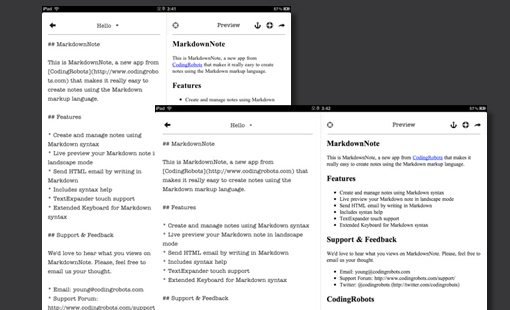 Writemonkey is a free app that’s a lot like Writeroom for Windows. Writemonkey supports Markdown and Textile markup standards. 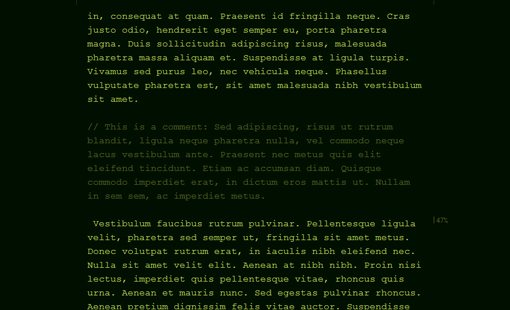 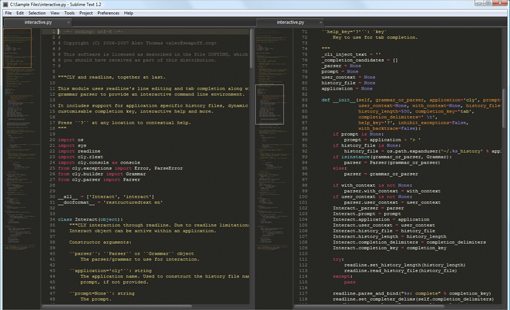 The official online Markdown Converter from Daring Fireball. Simply paste in your text and get both the HTML output and a preview. There’s also a handy cheat sheet on the right side of the page. 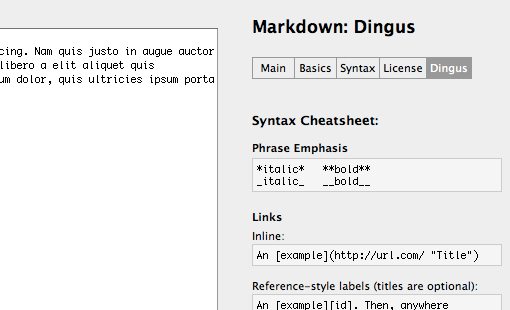 This is one of my favorite online Markdown editors. It’s nice and simple with just the right amount of options and zero clutter. I love the two window mode that lets you see the HTML preview of your Markdown as you type. You can then download the HTML and/or Markdown versions. 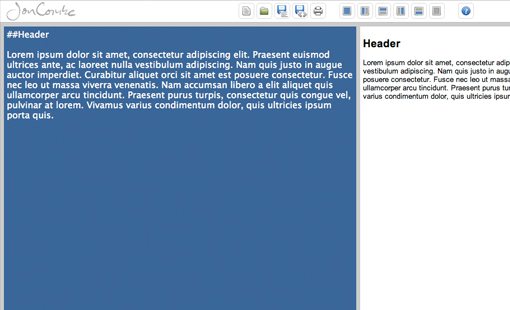 Like the previous link, this tool has a two window setup that lets you view the output as you type. 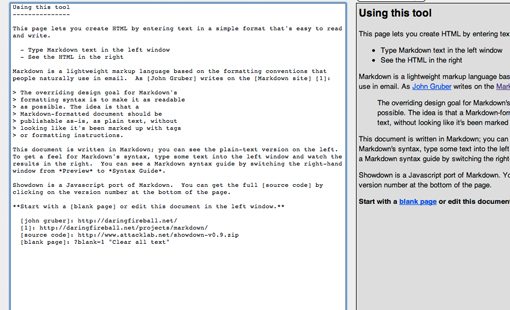 This one is new to me but I already really like it. It updates the preview live as you type like the previous two links but places a much larger visual emphasis on the output with a huge preview. There’s also a tweet button and even a QR code generator for your result, how cool is that? 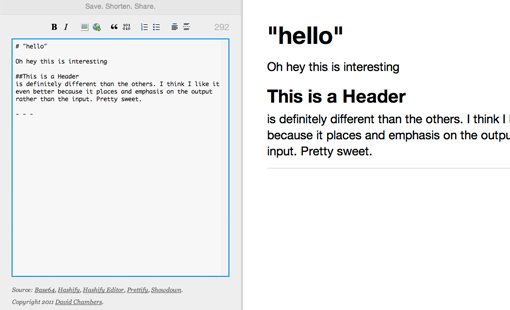 Yet another two window Markdown Editor with options to preview either source or syntax. 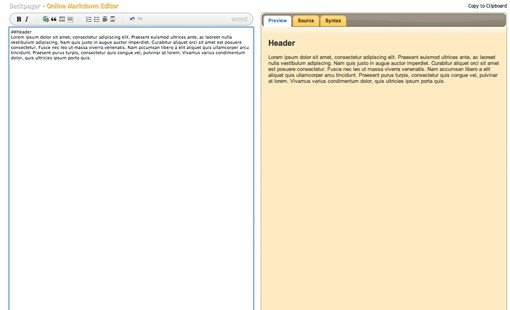 Markdown fits into a category known as Lightweight markup languages, and it’s by no means the only one. If you’re looking for others, Wikipedia has a stellar feature by feature comparison of all of the popular options such as Markdown, Textile, txt2tags and more.

That concludes our roundup of Markdown resources. If you’re just starting your Markdown journey, bookmark this page as your one-stop-shop for everything you need to know and download.

Leave a comment below and let us know what you think of Markdown. Have you ever tried it? Do you use it frequently? What resources and apps have you found to be helpful?