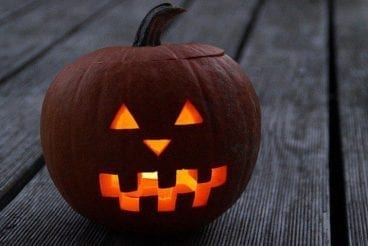 The spookiest day of the year is right around the corner. Take your Halloween pumpkin game up a notch by showing off your graphic design skills with a custom carving, and get inspired with these Halloween pumpkin ideas!

It’s not too late to find the perfect pumpkin at a local patch and spend some quality time (along or with your family) crafting a carving that no one else on your street will have. Not sure where to start? Here’s we’ve collected 20 creative Halloween pumpkin carving ideas, from simple scenes to iconic graphic design elements to a few customized spooks.

1. Show Off Your Skills 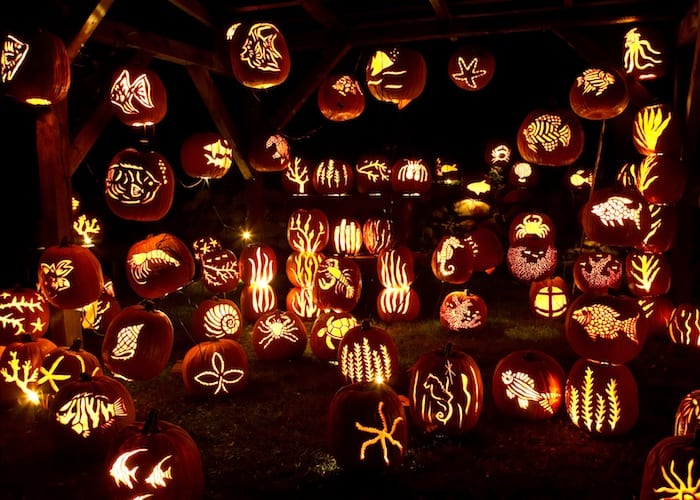 Design a carving that isn’t a traditional Jack-o-Lantern. You can carve almost any scene that strikes your fancy with the right tools.

Show off a little design humor with a Pantone-inspired carving that shows your favorite orange hue. 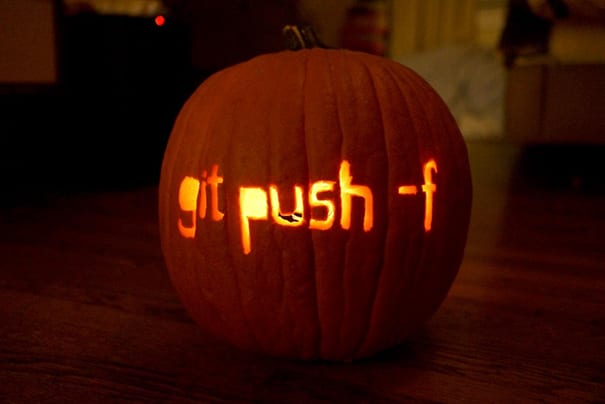 Show your code humor with a clever line that only designers and developers will understand. 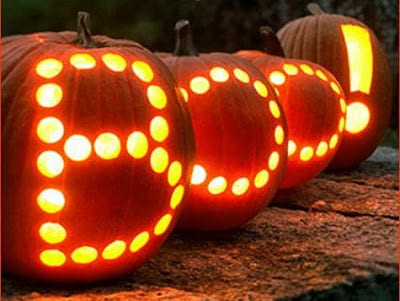 Come up with a creative way to create multiple carvings that connect using several pumpkins together. 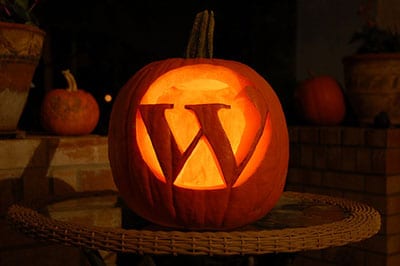 Show your love for Adobe or WordPress with a logo carving.

6. Dedicate to a Special Character 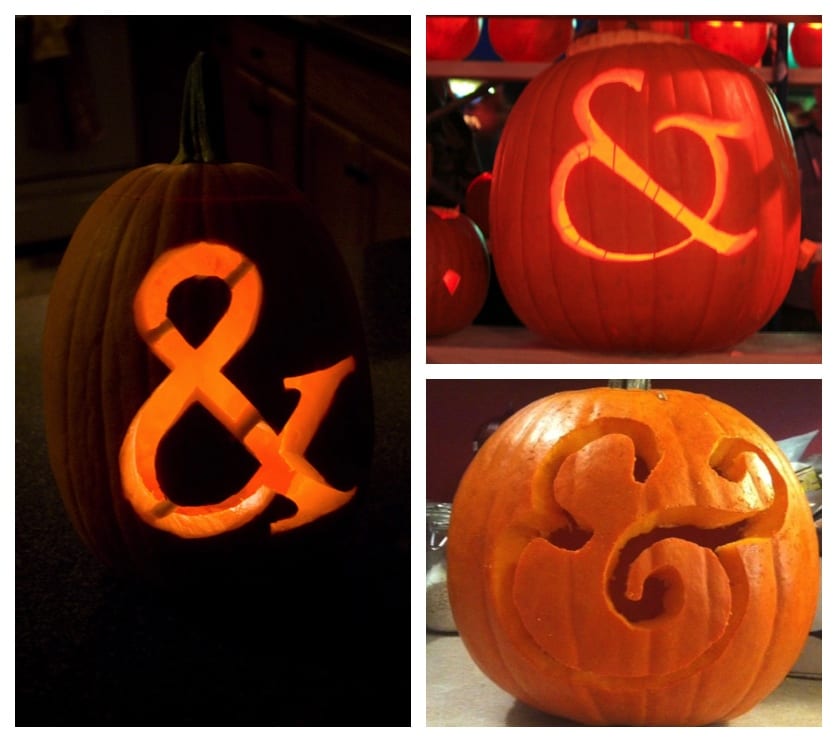 Everyone has a favorite letterform or type element — mine is the ampersand — carve it creatively or using your favorite font. 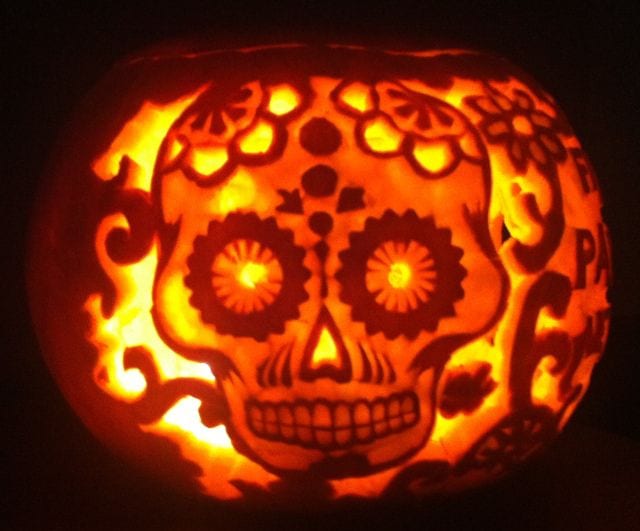 It seems like sugar skull images are everywhere this season. Go trendy and carve one of your own.

From star of horror movies to video game heroes, use your pumpkin carving skills to create a replica of your favorite fictional character. 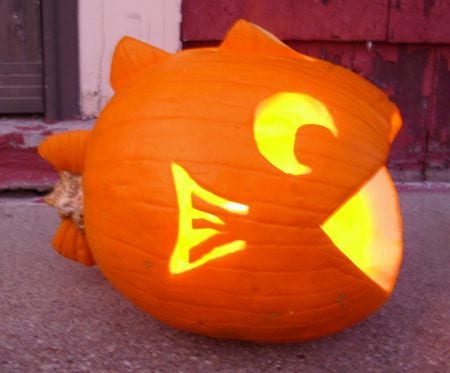 Most pumpkin carvings feature designs on a round, head-on canvas. Turn the pumpkin around and cut out parts of it to create new shapes for a different spin on the carving, such as the fish, above. 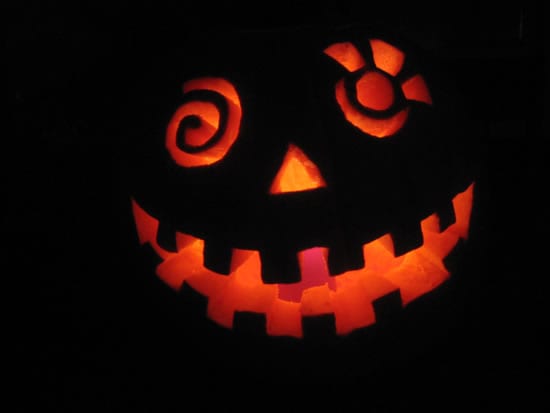 Try a silly pumpkin carving design instead of creepers. This more family- and kid-friendly option might just be a hit at your house. 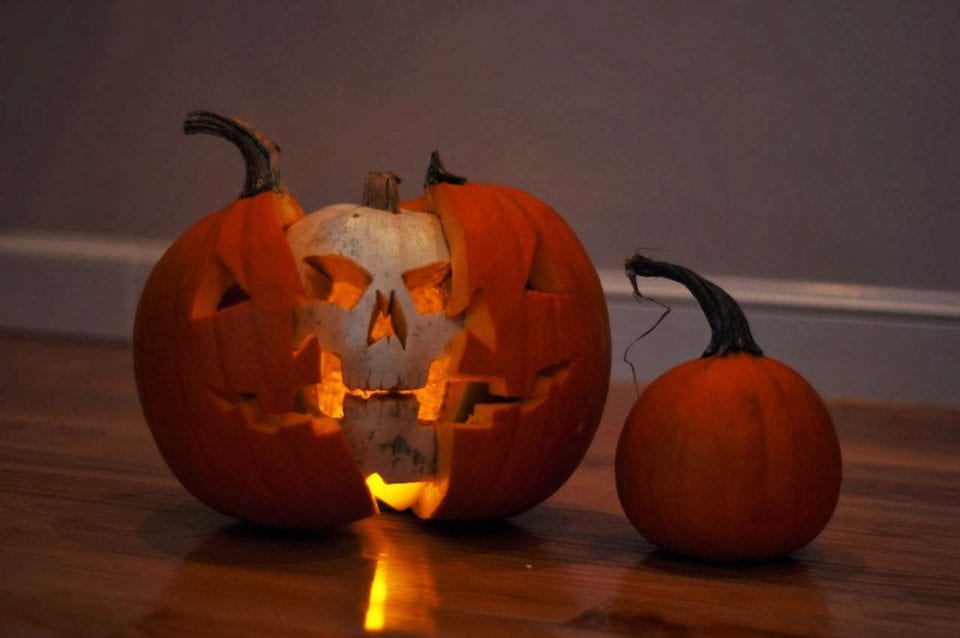 Admit it, there’s been a time or two when you dropped the pumpkin and smashed it a little or when the carving just went a bit awry. Make the most of it with a double-pumpkin design and turn that mishap into a happy accident.

12. Pumpkins Plus Other Elements 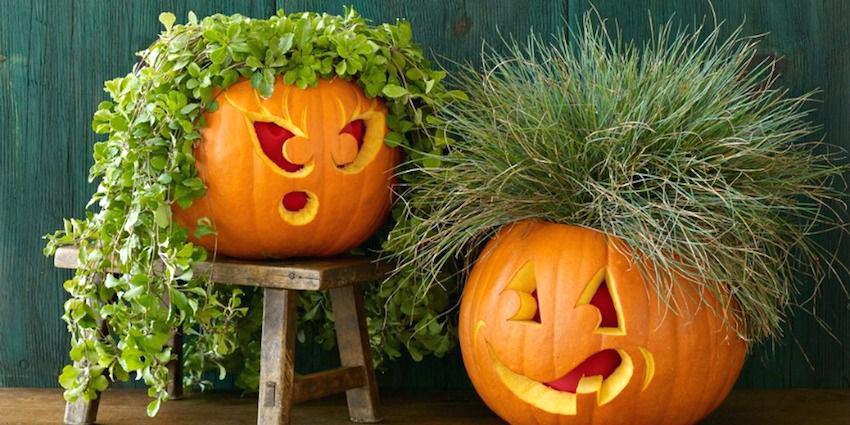 Take your carving to the next level with add-ons. Organic elements are a natural fit, such as the greenery above. But you can also add lights or other materials for a mixed-media Halloween decoration. 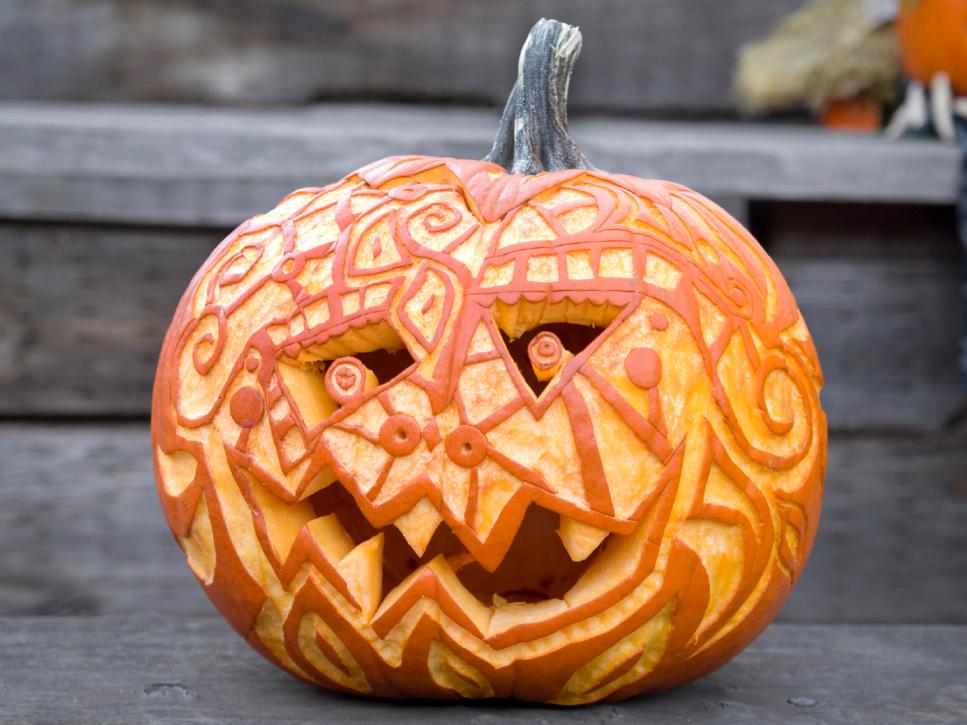 One of the more recent trends in pumpkin carving is to create a design with cuts all the way through the flesh of the pumpkin as well as carving partially through the outer shell. (This can allow varying amounts of light to shine through and accommodate more intricate patterns.) 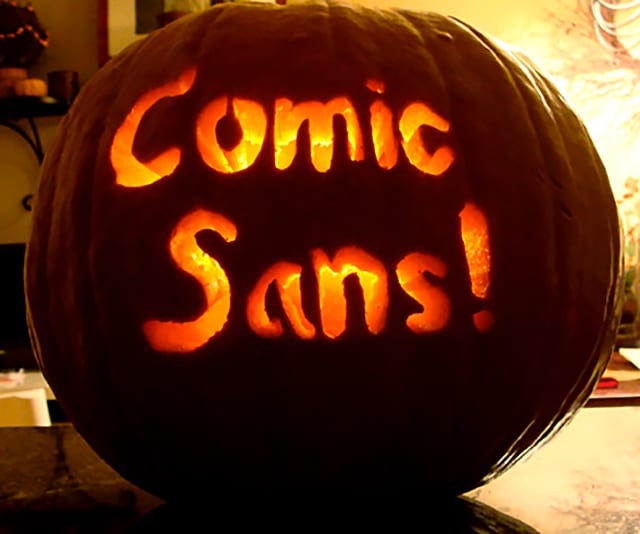 Get in the holiday spirit with an absolutely scary design, such as the homage to Comic Sans above.

15. Use a Creepy Character 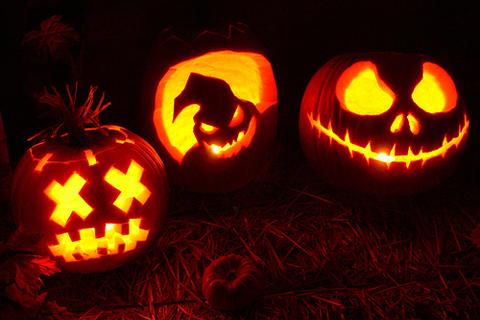 Or you can highlight the scary season with a character that’s actually creepy, such as a ghoul, goblin or less-than-friendly face. 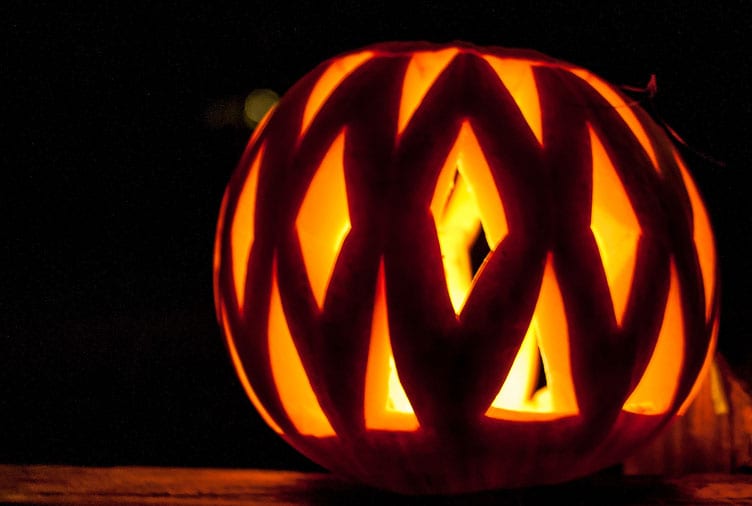 Rather than focusing on just one side of the pumpkin, develop a pattern or texture that can be incorporated all the way around. (It’s a great chance to use a trendy geometric shape.) 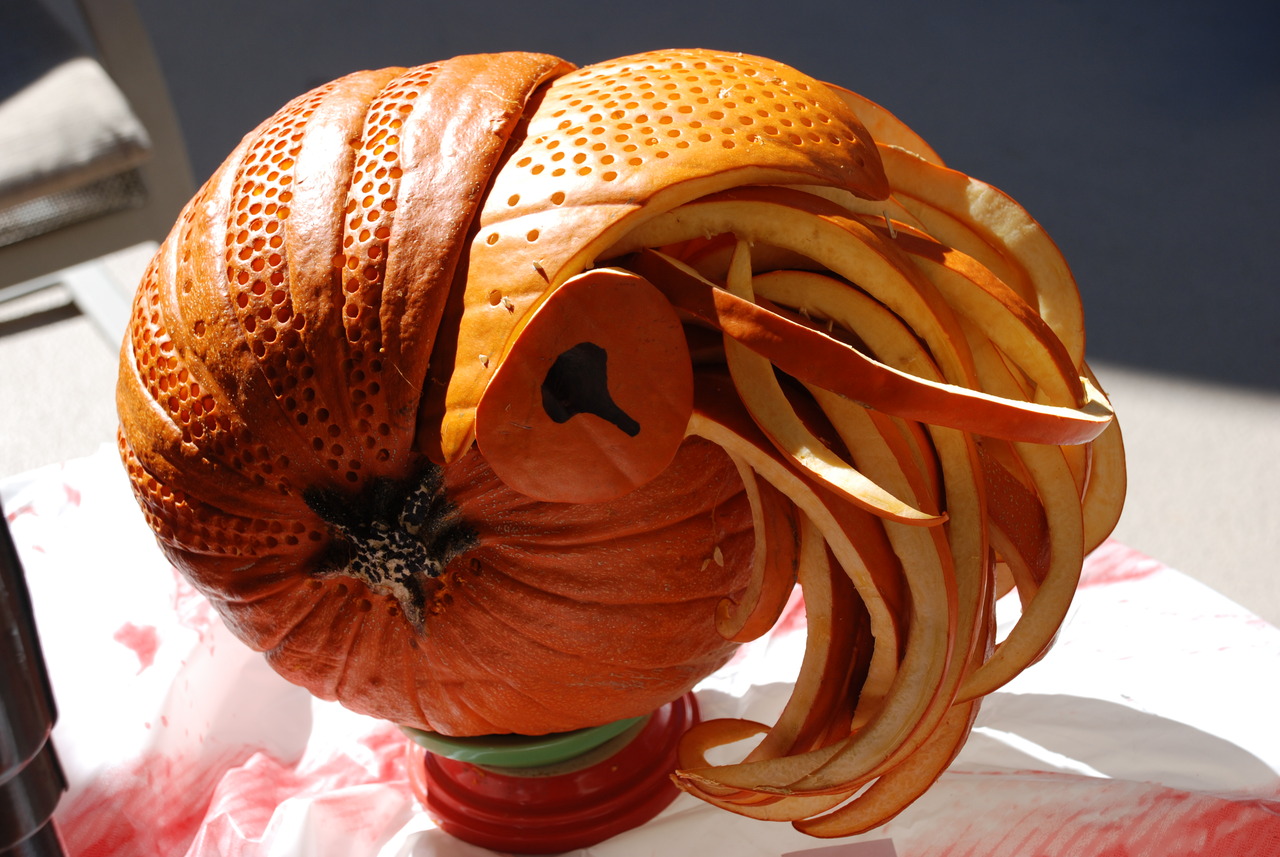 Go beyond a simple carving with a pumpkin concept that uses a lot of imagination. Note how the example above mimics the golden ratio in the shape of a nautilus. 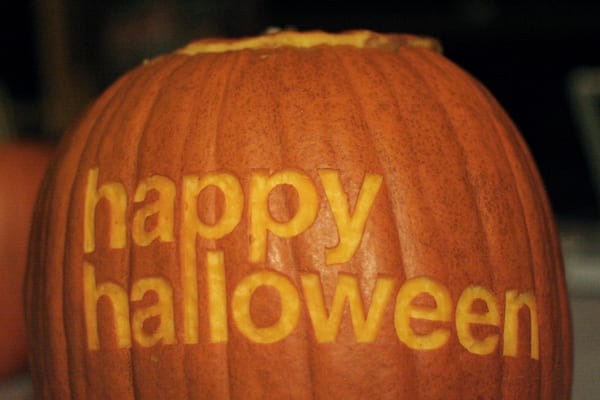 Show off your design skills with a special message featuring your favorite font. Who said a carving has to be a picture? Words are OK, too. 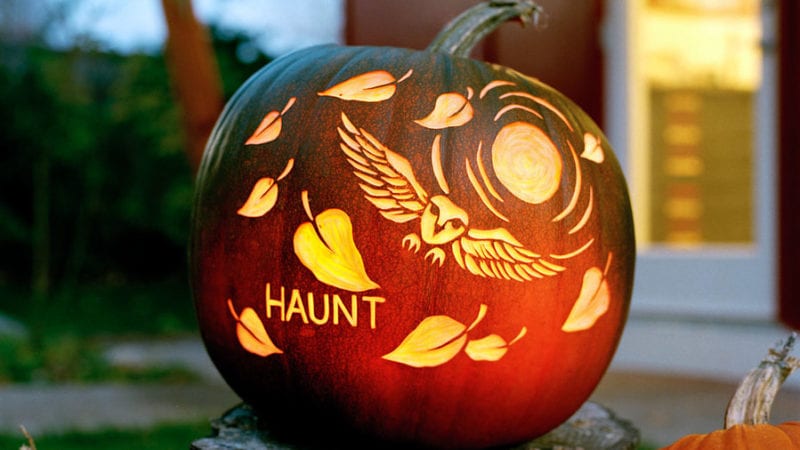 If you plan to put a candle your pumpkin make sure the carving is designed to let that light shine through. Create a design that will look great in the dark, even if you can’t see the pumpkin itself.

20. Stick with a Classic 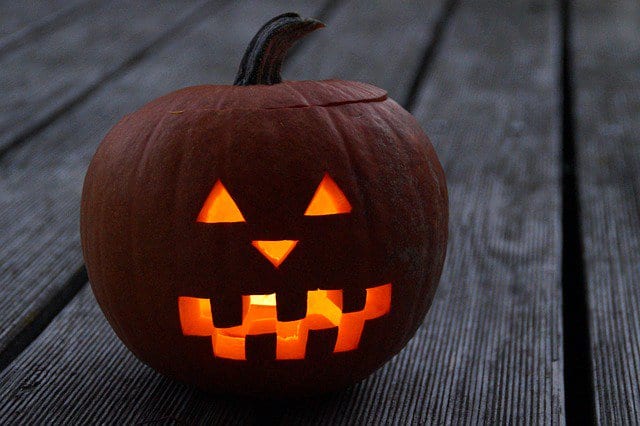 Just because you can go crazy with pumpkin carving doesn’t mean you have to. Sometimes the best idea is the most simple, classic one. Carve a classic Jack O Lantern with and put a candle inside to light the way for trick or treaters.

How Do You Carve a Custom Pumpkin Design?

Turn your design into a template for a custom Halloween pumpkin graphic design carving. Here’s how you do it:

Images from Google search. Design Shack did not actually carve these pumpkins (all our fingers are intact). Click the images for source links, information and more.