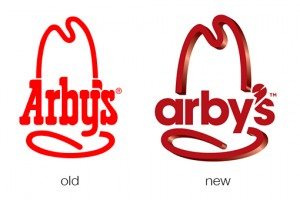 The question of course is, did they succeed? Follow along as we take a look at the logo and website to see what we think.

Before we launch into a discussion of the new Arby’s branding, it’s important to get some perspective and see where they’re coming from. Let’s take a minute to look at some of their old stuff.

To begin, here’s the old logo: 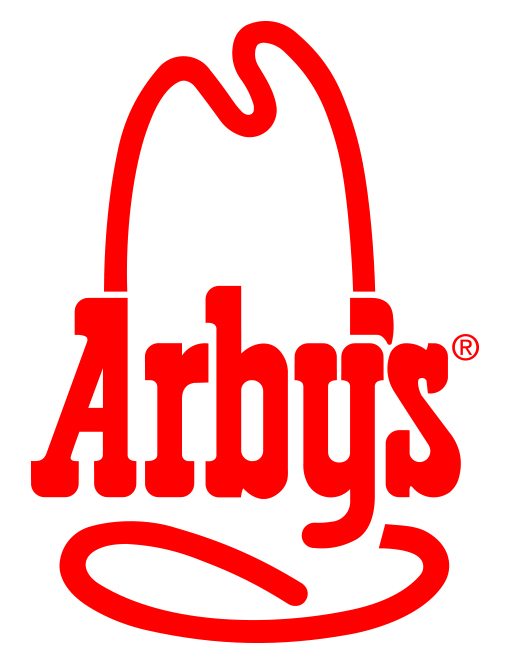 If you’ve never seen this before, it might be a bit of a shock. A weird cowboy hat and old western text? Really? What you have to remember is that, for the most part, this logo hasn’t changed much in several decades. Consequently, there’s a bit of nostalgia wrapped up in there for a lot of people who grew up seeing the giant cowboy hat and equating it to eating delicious curly fries with the family.

Any time you’re working with a long established brand, people are going to kick and scream when you go and change it. Strangely enough, it can be perceived as some sort of attack on their childhood or an unwelcome reminder that they are in fact getting old. People form strong bonds with brand images throughout their life, and they often don’t even realize it until those images are permanently changed.

“Any time you’re working with a long established brand, people are going to kick and scream when you go and change it.”

It’s difficult to find images of the original Arby’s logo from 1964, but some of the old signage gives us a good indicator of what it looked like: 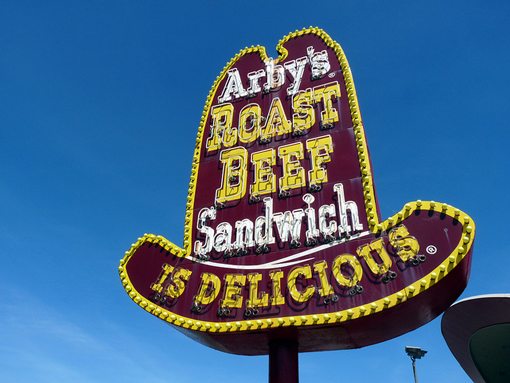 Given that the founders originally wanted to call the restaurant “Big Tex,” this seems appropriate! As you can see, the logo that we know now seems like a fairly natural evolution of this older version. The hat has been abstracted and simplified and the text has been reduced (in terms of word count) and enlarged.

Though the two are drastically different, it can definitely be said that the current Arby’s logo maintains the heart and soul of the original. To young eyes, it might seem a little dated and goofy, so I can see why an update is in order, but careful consideration is necessary when approaching a project like this.

Before we move onto the new branding, let’s take a quick peek of what the Arby’s website looked like a few months ago. This gives some important insight for how the brand had evolved and what its personality was like.

Using the magic of The Way Back Machine, we can travel through time and see the previous Arby’s website: 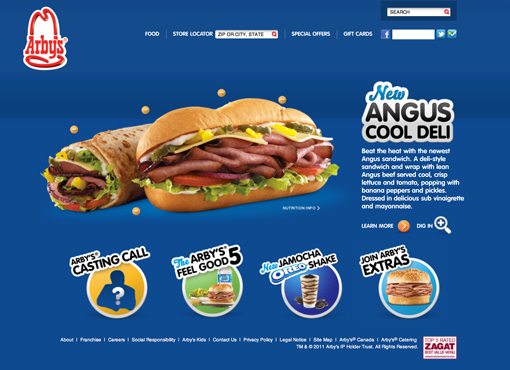 It’s actually a pretty nice design. Attractive food shots take center stage, the circles on the bottom are a nice touch and there are a lot of cool type treatments. As you can see, the brand seems to be all about super bright colors. It’s a fun, light-hearted look driven by excitement.

Digging further, we can see the designers beginning to play with ideas for pushing the logo forward: 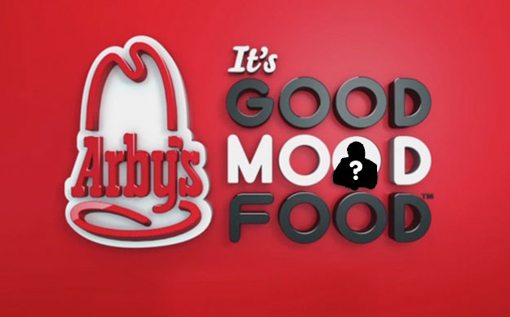 Here we see that Arby’s has gone 3D. Note that this is a full on 3D extrusion with both the text and hat taking on a perspective and plenty of gloss. The logo in the upper left of the website has taken a less dramatic approach, no doubt the simplified vector translation of the glossy 3D idea.

In this version, only the hat takes on the 3D perspective. It almost looks like a branding iron, which fits with the brand. It’s a little odd given that the text is straight on though, it plays with your eyes a bit.

Fast forward to 2012 and Arby’s has furthered the logo evolution. Here’s the brand new version: 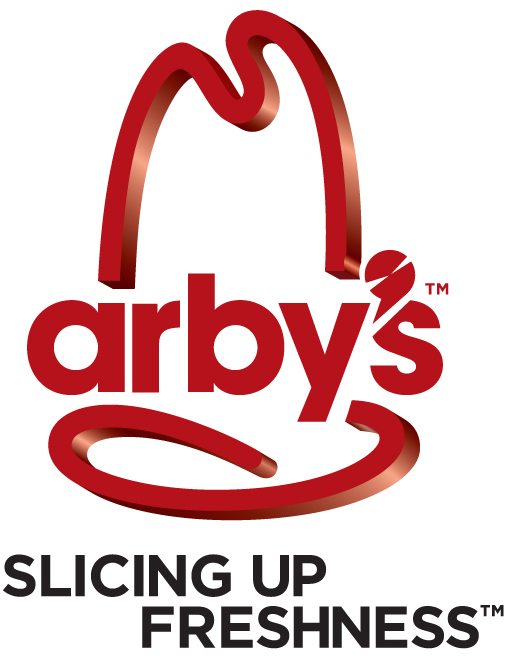 As you can see, the 3D hat is actually nothing new. It’s nearly identical to what we saw in the previous section. However, when compared to the flat version of the old logo, which is what most people are used to, it seems like a pretty dramatic change. 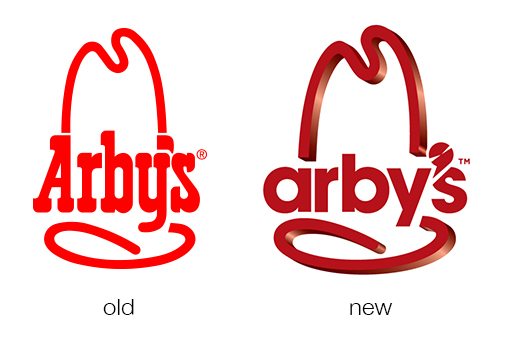 There’s a lot to discuss here, so let’s break it up into a few different sections.

I still think the 3D hat with the flat text comes off as a little weird, but I can identify with their struggle to somehow update their look to something more modern.

With the 3D has come a shortening of the height of the hat. Looking at the two side by side, the old version definitely seems a little on the tall side above the text. I actually think this is a good call and have thought for years that it could do with a little shortening.

Ultimately, I think the 3D hat is something that will date itself extremely quickly. I bet that they’ll revert to a flat hat icon in a few years.

Here’s the real travesty of the logo update. Forget the 3D discussion, what have they done with the text? Did the folks at Gap get ahold of this? It seems that every corporate logo designer is intent on ruining custom type work with boring sans-serif fonts. It drives type lovers nuts!

The typeface chosen here appears to be a close relative to Futura Bold, with some custom modifications, such as the straight lines on the “s”. They’ve also gone all lowercase, just so you know that they’re cool. I’m half surprised their new slogan isn’t “lol”.

“What the heck is Futura doing next to a cowboy hat? It’s like they’re trying to ride a horse through IKEA.”

Ultimately, this is where I think they killed the Arby’s brand. The logo doesn’t even make sense anymore. What the heck is Futura doing next to a cowboy hat? It’s like they’re trying to ride a horse through IKEA. The old southwestern imagery of the hat simply does not meld well with such a starkly modern typeface. It’s an awkward and wince worthy juxtaposition.

Arby’s current marketing kick is all about how they slice their meat right in the restaurant, as opposed to other guys (cough, Subway) who apparently slice their meat in a factory. “Slicing Up Freshness” is the new slogan, which is certainly far better than “It’s Good Mood Food.”

To integrate this new focus into the logo, they replaced the apostrophe with a blade that cuts into the s.

Overall, not a bad way to convey their message. I personally think that the idea was better than the execution, but I can at least see the logic here.

What Would I Have Done?

Honestly, I’m in the camp of old fogies who actually like the old logo, so I’m not sure that I would’ve changed much about the old logo. As I mentioned above, I think taking out a lot of the vertical height would go a long way. Perhaps something like this: 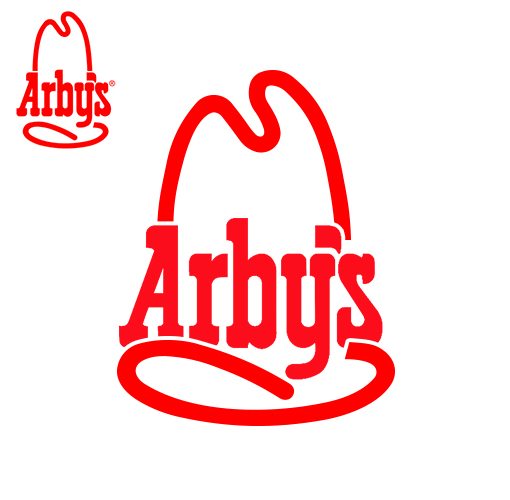 By introducing some overlap, we can tighten things up considerably. This removes the exaggeration and gives the logo a more serious look. Given enough time (this was my ten minute fix), I would also spend some time modifying and tweaking the letters to be a bit more modern without removing their southwest flare.

Now that I’ve said far more about the Arby’s logo that you probably ever wanted to hear in your life, let’s move onto the website. Here’s the new design: 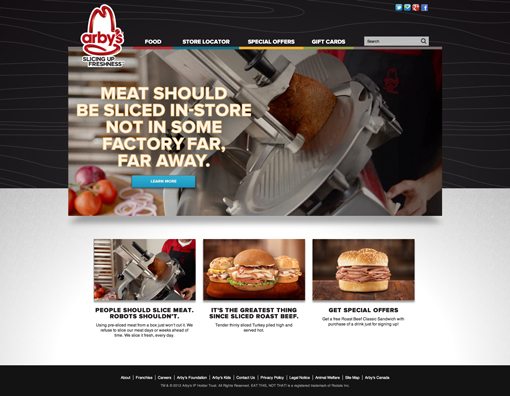 Now, I gave the logo a lot of grief, but now it’s time to compliment the Arby’s designers: this is great. I love the heavy emphasis on attractive photography. This new look is far more masculine, adult and mature than their old site.

“I gave the logo a lot of grief, but now it’s time to compliment the Arby’s designers: this is great.”

Notice that the bright colors are much more selectively used now, with most of the site’s background being restricted to black and white. The wavy, abstract wood texture is the perfect way to give a modern spin to a southwest feel.

The bulk of the home page is taken up by a big, beautiful JavaScript slider. In the slider, we see some really nice graphics and photos:

Despite the fact that I hate the typography in the logo, I think the type here is really nice. They’re still using a sans-serif but they’ve given it a woodcut effect that puts the time period and visual style right on target. 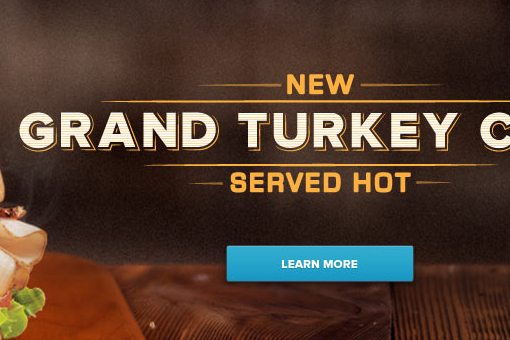 My one beef with the website (see what I did there?) is that it’s not responsive. Instead, they’ve chosen to take the separate mobile site route: 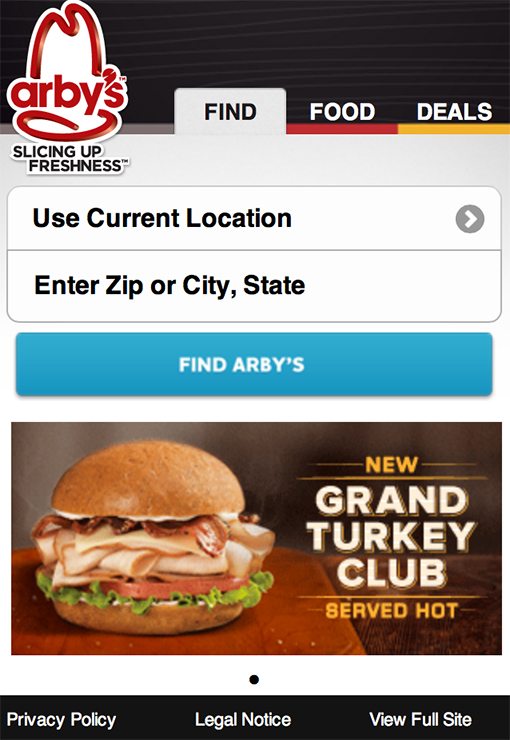 To be honest, I don’t mind this so much. The design here is nice and I think they’ve done a great job of targeting the functionality to what they think mobile users are really looking for. Unfortunately, when I visit the mobile site on the iOS and Android devices sitting on my desk, this is what I see: 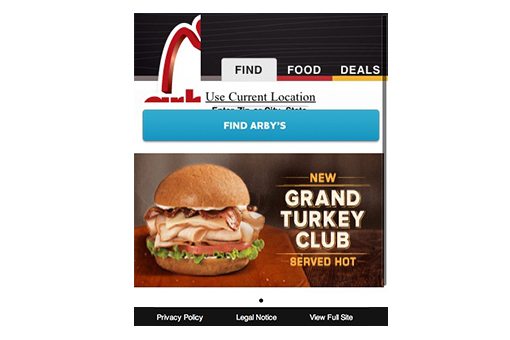 Pertty rough! Obviously, they’re having some issues in the mobile arena. This serves as an unfortunate blemish on an otherwise really great site.

When major corporate brands drastically redefine their look, there are only two reactions that the public usually chooses between: love and loathing. We all loved the recent streamlined Starbucks rebranding and hated on the Tropicana redesign so much that they changed it back.

Thus far, I haven’t seen any positive feedback regarding the new Arby’s logo. The general consensus seems to put it in the hate category. Personally, if I take in the project as a whole, I have mixed feelings. I’m certainly not a fan of the logo, that type makes me Hulk out, but the website actually has a great aesthetic.

What do you think? Leave a comment below and vent your thoughts on both the site and the logo refreshes. What would you have done differently?