Adobe Creative Cloud: Is Subscribing to Software a Good Idea? 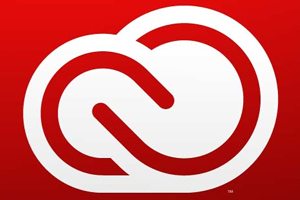 Fresh off the heels of purchasing my new MacBook Pro, I decided that it was time to make the jump to CS6. This of course brought up a critical choice: how should I purchase the software? These days Adobe provides you with a plethora of options for getting your hands on their apps and choosing the best method for you isn’t always easy.

The newest method of obtaining the Creative Suite caught my interest right away: Adobe Creative Cloud. Under this model, you’re really leasing the applications instead of buying them. Is this a good idea? Is Adobe Creative Cloud worth it or is it a short term convenience that turns into a long term nightmare? Let’s explore.

Before we jump into our discussion of Creative Cloud, we need to get some perspective by examining the other options. Before Creative Cloud came around, there were two basic options for getting your hands on the apps in the Creative Suite: individually or as a bundle.

Given that I’m a web designer talking to other web designers, I’ll take a very Photoshop-biased approached. Your app preferences may vary, but the ultimate logic should be close or identical. For the most part, this app is the reason many of us buy the Creative Suite. Now, since I have a background in print, you won’t ever find me working on a machine without Illustrator and InDesign as well.

Given this information, I could probably get along pretty well with the base level “Design Standard” version of the Creative Suite, which would run me $1,299. 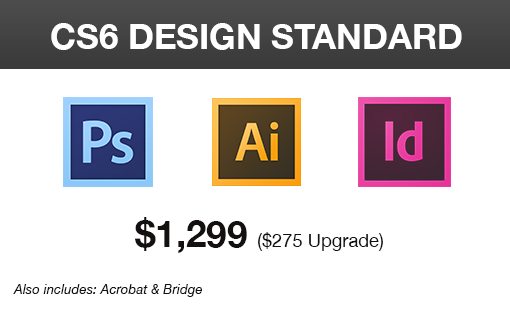 As you can see, this hits my big three apps: Photoshop, Illustrator and InDesign. These are what I really need to do my job on a day to day basis. Now, if we transition into which apps I enjoy using and would also like to have in my Applications folder, I’d have to toss in Fireworks as well.

Unfortunately, if I want the suite with Fireworks, I have to move up to the “Design & Web Premium” version, which also includes Flash Professional and Dreamweaver, neither of which interests me in the least. 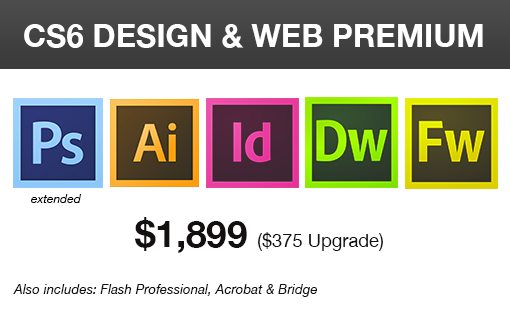 To get this version, I would have to shell out $1,899 if I were starting from scratch. Given that Fireworks is only $299, it would actually be cheaper for me to buy the Design Standard version and add on Fireworks individually.

However, the wildcard is that with this version of the Creative Suite I actually get another interesting upgrade: Photoshop Extended. Most of the benefits here lie in the realm of 3D editing, which you may or may not be into (full comparison here).

If you want to go all out, you could get the Master Collection for $2,599. This will land you other awesome apps like After Effects, Audition, Encore, etc. Many of us love these apps, but can live without most of them (admittedly, I’m not happy without After Effects).

Now, despite the fact that Adobe pushes the suites to get you to purchase as many apps as possible, you can in fact simply buy individual applications instead. Here are the prices of some of those that we’ve looked at. 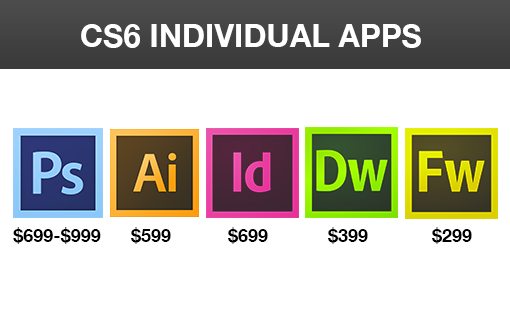 If I could manage to get by on Photoshop, Illustrator and InDesign, and that’s a big if, I would still have to fork out almost $2,000! Needless to say, if you need more than one app, this is a pretty silly way to go. You might as well just buy one of the prebuilt suites. 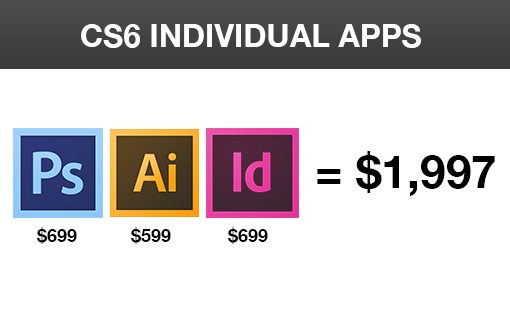 By now we have a good feel for the general value of the apps in the Adobe Creative Suite. It’s important to take this a step further though and look into the future of the suite.

Historically, CS releases were awkwardly staggered but in 2011 Adobe CEO Shantanu Narayen announced that they would now shoot for an annual update schedule. The child in you eager for new toys rejoices at this news, but the adult in you with a limited budget will no doubt groan as the cost of doing business just shot up significantly.

Do You Really Need to Upgrade?

Some Adobe apps, though not all, don’t necessarily play too well with older versions. For instance, an Illustrator document from CS6 will suffer unintended changes or simply refuse to open in Illustrator CS4. As Adobe piles on the features, the more likely it becomes that the features you use to build your artwork simply aren’t compatible with older versions. In my experience, Photoshop tends to be much more forgiving given that you’re working with pixels, though even here you’re going to run into issues.

Back when I was in print, staying up on the most current version of the Creative Suite was a necessity. I was constantly sharing files with printers and other creatives within my company and it was generally expected that everyone would keep up with the state of the industry. Back then, I wasn’t purchasing the software so it wasn’t a big deal to me.

These days I work in web design, don’t share my layered files as often and have to purchase my own software. If you also fit this description, the argument to upgrade every single time Adobe thinks of something new sort of breaks down (though writing tutorials means I personally still have to stay up to date). You’ll likely be able to work just fine for several years without forking out for an upgrade, just keep in mind that jumping up multiple versions is more expensive than only taking a single step.

The folks at Adobe aren’t idiots, they’re marketing geniuses. They know full well that the costs of updating your suite every year is enough to make tons of designers frustrated, angry and intimidated. They’re putting you into this state to offer up an extremely enticing new solution: Adobe Creative Cloud. 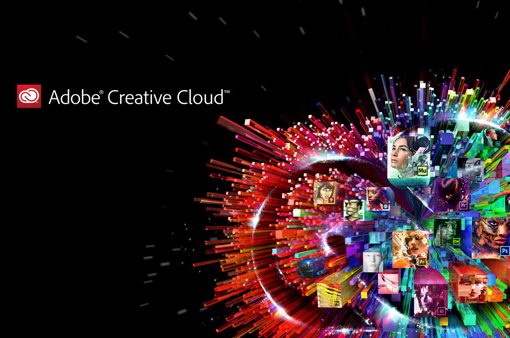 This solution gives you all of the benefits of the ginormous Master Collection and more. On top of having access to every app you could want (except Lightroom, what gives Adobe?), you can also take advantage of Adobe’s Cloud Storage services so you can access your apps from anywhere. 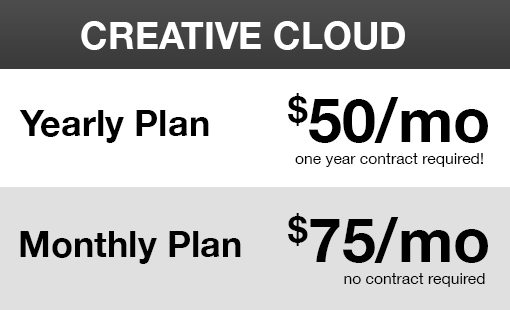 As you can see, if you want to go month to month, the price jumps up quite a bit. Obviously, it’s a good idea to decide whether or not this service is for you and either jump in or out, because you’re getting screwed on the month to month plan.

There’s another hidden caveat here as well. Even if you commit to a full year at $49.99, your contract is over at that point. Just as with your cell phone contract, Adobe could easily decide to up the price after the termination of the contract. I foresee a future where the Creative Cloud service has several steps just like the current non-cloud Creative Suite options above.

One silver lining is that existing CS customers can get the first year for only $29.99, but again, that’s a short term benefit and you need to be thinking long term if you plan on being a designer for rest of your foreseeable future.

Is It Worth It?

My software is no longer purchased for me, so I have to buy apps for myself. I have no purchase history and therefore have to start from scratch, no upgrade prices. Given this, at least in the first year, this seems like a no brainer. For $600 I get all of the Adobe goodness and more offered by the $2,599 Master Collection. It takes Creative Cloud over four years to catch up to that cost. 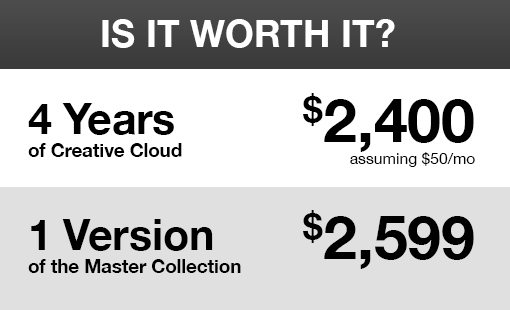 Now, if I had only purchased the $1,299 Design Standard version, I would obviously have saved myself a bundle, though I’d have to sacrifice lots of great apps. Given this route, I could probably snag $275 upgrades for the next few years. After four years, I will have paid $1,299 to start and then $275 for the next three years, which brings me to about $2,124. 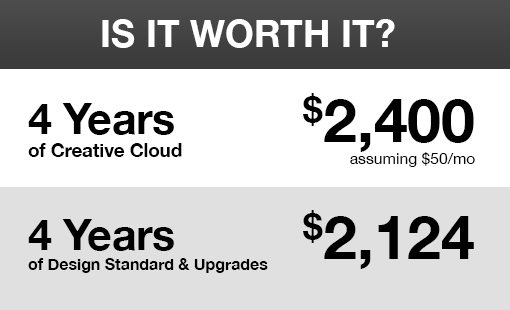 Honestly, this option is only a little bit cheaper than going with Creative Cloud, which gives you a ton more apps and services. However, if you really want to start thinking long term, you could fast forward ten years. Here, the benefits of being a cheap skate are finally paying off big time. You will have saved over $2,200 by going with the Design Standard Creative Suite with yearly upgrades. 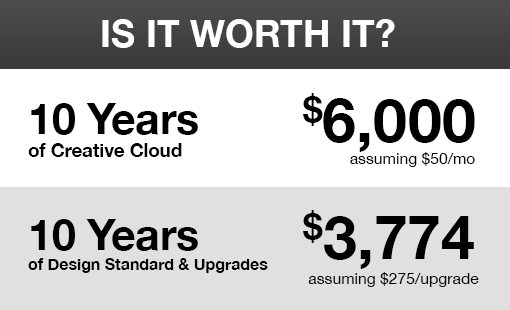 That being said, no matter what, if you want the Master Collection and receive continual upgrades, it’s going to be cheaper for you to stick to the Creative Cloud over the next decade. 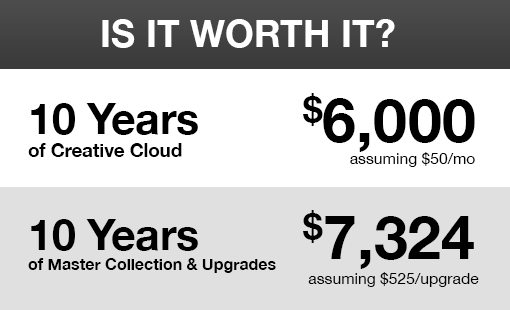 Once again, there are many assumptions here that simply aren’t true. The likelihood of the costs for all of these choices remaining static is pretty much a big fat zero. Further, if you already own a legit, non-pirated version of the Creative Suite, and lots of designers do, then you can cut out that initial purchase, making the yearly upgrades at $275 or even $525 more enticing than paying $600 for Creative Cloud. Also note that I’m sticking to individual licensing here, volume pricing will be considerably different and Adobe is planning on releasing a special version of Creative Cloud for teams soon.

One final assumption is that Adobe will make good on the promise of truly annual updates. Many other comparisons that I read were based on a two year update schedule, but given the CEO’s promise, it doesn’t look like these estimates will be useful.

Upon initially seeing Adobe’s Creative Cloud offering, I scoffed. Leasing software seems like a horrible way to go from a financial perspective. However, upon closer inspection, it really wasn’t as bad as I thought. If, like me, you’re starting from scratch, the Creative Cloud route is dang enticing depending on how many apps you absolutely must have for work.

If all you really need is the basic Design Standard Suite, you’re probably going to be better off going with the single big purchase and yearly upgrades. However, if you need one of the more expensive suites, the Creative Cloud starts to become a really solid option. Granted, I’m certainly not happy to fork over $600 per year, but it does cut down on setup costs in the short term and takes care of me fairly well in the long term.

Again though, if you don’t really see a need to stay up to date with the latest software, then you can save yourself a good deal of money by avoiding monthly fees that might or might not go up in the future.

I’ve seen a ton of negative feedback about the Creative Cloud subscription setup and I’m sure I’ll see plenty more in the comments below. I personally needed to jump in, play around with the numbers and really get a feel for all of this myself before deciding. This article allowed me to do that while helping others do the same so I hope you found it useful.