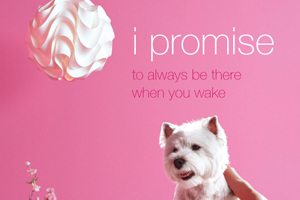 Can type have a gender? Is it even socially acceptable to ask such as question? Putting aside any sort of nonsensical gender bias, it’s absolutely the case that typography can and does suggest a level of masculinity (or a lack thereof).

Today, we’re going to jump into what makes a typeface feminine vs. masculine. More importantly, we’ll talk about why this matters and and how it should influence your design work.

The Masculinity of a Typeface

The idea of a typeface being masculine or feminine may seem a little silly, or even obvious, but it’s an important lesson to learn and consider when working on any design project.

Most of us that live in the developed world are schooled at a very young age in the ways of gender targeted design. If I ask my five year old niece which of the following color schemes she likes best, I can say with 100% certainty that she’ll pick number two. Her brother on the other hand, would pick number one. 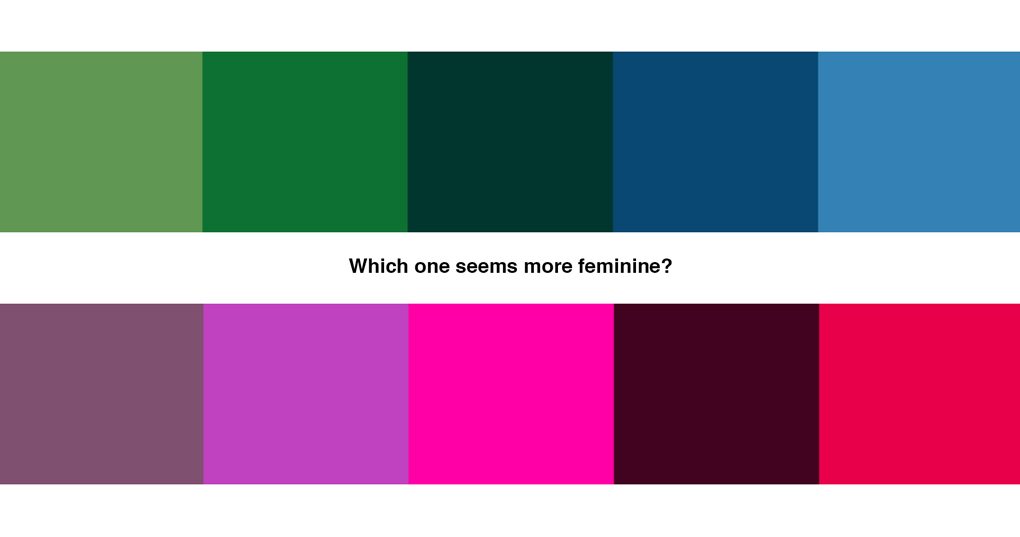 Does this mean that these children are sexist? Nope, just that they, like countless other people, have learned to associate certain characteristics with their gender. This carries over into a ton of other aspects of design, from photos and graphics to the complexity of the layout. The area we’re focusing on today is typography.

It just seems wrong doesn’t it? Beyond the color, we have the opposition of the concept and the visual representation of that concept through the type. A chainsaw is a masculine device. It’s loud, obnoxious and destroys everything in its path. The typeface on the other hand is smooth, curvy and delicate.

We can flip this example on its head to further prove the point. This time we’ll type out a message that’s quite feminine in a very masculine typeface.

No matter what your level of design experience may be, there’s probably something inside of you that tells you that this is wrong. The word “Ballerina” simply shouldn’t be typed with in ChunkFive!

Do lots of girls like chainsaws and lots of boys like ballet? Sure, and that’s awesome. Like it or not though, hitting a target audience often means leveraging some stereotypes. More on this later, but for now, chill out and don’t get mad at me for saying that pink is feminine.

The examples above are intentionally extreme. You’ll find though that most things won’t be so black and white. For instance, would you say that the example below is feminine or masculine?

You can probably construct an argument either way. Trees are strong, stable and tough. They take generations of abuse and simply stand there asking for more. So they’re masculine, right? On the other hand, they’re attractive and organic. So maybe they’re feminine. The other characteristics aren’t helping much either: green and Helvetica. Both seem pretty neutral. So what gives?

This illustrates that colors, concepts, and typefaces all exist on a continuum. On one side is the masculine ChunkFive black chainsaw and on the other is the Lavanderia pink ballerina. Most everything else though lies somewhere in between the two. Your job as a designer is to decide where something lies on that continuum and how that relates to what you’re trying to communicate.

What Makes a Typeface Masculine or Feminine?

Now that we’ve got our minds wrapped around the basic idea of masculinity and how it pertains to design. Let’s talk about some of the specific characteristics of a typeface and how that translates to the level of masculinity. Most of these are intuitive, the point here is not to state the obvious but to get you to turn your implicit knowledge into explicit knowledge that you consider in each project.

Some typeface families, such as Helvetica, are fairly towards the center of the masculinity continuum. However, within the Helvetica family, you can use boldness to push the otherwise neutral typeface towards being masculine or feminine.

Notice how delicate the thin letters appear in contrast to the bold, powerful example below. There’s actually a second trick at work here as well. Lowercase letters can be a very subtle way to push a design in a feminine direction while all caps can make it more masculine.

In general, the presence of a serif of any kind tends to make a typeface look a little more masculine. This is especially true if it’s a nice strong serif.

Remember the example with ChunkFive from before? Slab serifs are so blocky that they make great typefaces for masculine design.

Perhaps the most signifiant piece of this puzzle concerns the overall shape and ornamentation present on a typeface. For example, masculine typefaces tend to be fairly light on ornamentation and contain lots of hard corners and edges. They steer clear of exaggerated curves.

Similarly, feminine typefaces are overly curvy and ornamental. There’s often lots of extra flourish and usually plenty of contrast between the thicks and thins.

These two typefaces serve as a perfect example. Notice how Haymaker is comprised of only uniformly thick straight lines and is literally decorated with spikes. It also only contains uppercase letters. It’s hard to get more masculine! Mission Script is the exact opposite, there’s barely a straight line to be seen.

“Not only are stereotypes not always harmful, they can even be helpful!”

When you go off to college, you learn that the stereotypes that you’ve developed over the course of your life are a negative thing. They’re mean, harmful and inappropriate. That is unless you’re a marketing student like I was, in which case you learn that you can use stereotypes to sell stuff to people.

It’s important to understand that, despite popular opinion, the concept of a stereotype is neither positive nor negative. It’s just an observation. Now, I fully agree that hurtful, unfounded and pointless stereotypes have no place in modern society. For example: “people from small towns in the midwest are just dumb hicks.” As someone who was raised in a tiny speck of a town (200 people!) in Missouri, I obviously completely disagree with this statement.

Let’s change this statement to be more factual and remove any condescension: “people from small towns in the midwest tend to like hunting.” This statement makes no judgment, it just states an observation that I would say is true. I’ve never personally been hunting, so I obviously stand as proof that it’s not a universal statement. However, I do recognize that, on the whole, this is a true statement.

The really crazy part is that, not only are stereotypes not always harmful, they can even be helpful! If you’re from Seattle and you’ve never been to the midwest, then this stereotype will probably discourage you from wearing your “meat is murder” t-shirt when you visit my hometown, unless you’re looking to start a fight with some nice gentlemen who have gun racks in their pickups.

From a design standpoint, this has huge implications. Even if no one likes to talk about it, designers and marketers use stereotypes daily, especially those concerning gender.

Back when I was in print design, I worked on two major U.S. dog food brands: Cesar and Pedigree. Have a look at each of the two following ads that I put together and consider who the target customer is for each. 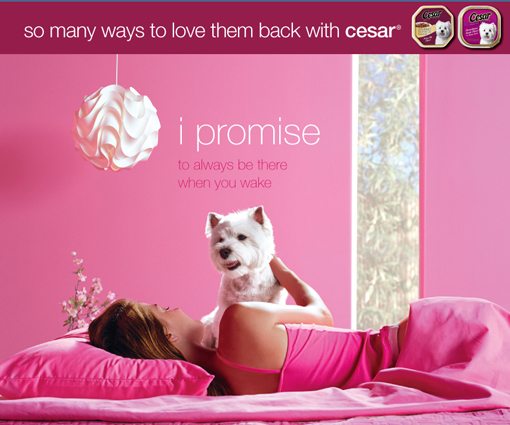 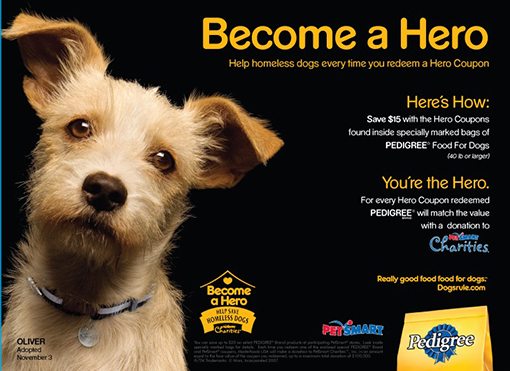 In one ad we have a highly manicured purebred dog in the most feminine woman’s room you can imagine. The principles that we went over above are hard at work. The type is thin, contains no serifs and is written in all lowercase letters.

Contrast this with the Pedigree ad, which shows a mutt on a black background with bold, yellow type. It uses a sans-serif typeface as well but its bold, cartoony look pushes it in the masculine direction.

Now, why do you think these ads are designed so differently? Was it arbitrary? Did I just feel a little more manly when I built the Pedigree ad? No! These are based on the carefully established identities of each brand.

Given that dogs don’t buy their own food, it’s not even different types of dogs that are being targeted here, but different customers. Cesar knows that the people who buy their product are the kind of people that will pay more money for less food. This implies a lot of things. They probably have a small dog and are well off financially (as you can see, there are a lot more variables than gender at play here). Conversely, Pedigree is a sort of “every man’s dog food.” Their ads praise the mutt and use emotional appeals to sell their product: what guy doesn’t dream of being a hero?

Who Are You Targeting?

This idea of targeted design is a vitally important concept that so many web designers miss out on. Always always always ask your clients lots of questions about who their site should target. Is it for an independent business woman in her forties or a young, stay at home dad? The answers to these questions should affect your design before you begin to sketch out a single idea.

The next time you fire up Photoshop and start looking for a good font for your current project, think twice about which one you’re choosing. Designers far too often choose a typeface based purely on a whim: this is what I like today. Professional design isn’t about what you like. It’s about achieving a set of goals and appealing to specific types of people. This should be reflected in your headline copy, typefaces, color schemes, and imagery.