Are Print Designers Doomed? an Important Look at the Facts

We constantly hear blanket statements about how print is in decline and the future of design is digital. Meanwhile, many print-only designers wonder if they should be taking steps to begin the overwhelming journey of learning a new career.

Today we’ll put rumors and speculation aside for a moment and take a look at some real data to see the actual projections for the print design industry and what actions, if any, print designers should be taking as a result.

Switching From Print to Web

Regular readers of Design Shack will know that I spent my first six years as a graphic designer in print. I created mostly POP, direct mailers and print ads for lots of popular brand names that you’d find as you peruse the shelves of any grocery store.

“I was forced to rapidly evolve or starve.”

I made the cardinal sin of allowing just about all of my work to come through a single client, which provided me with more than I could handle for years but eventually led to a situation where work was on the decline and I was forced to rapidly evolve or starve.

As a result, I taught myself to be a web designer and developer. It seemed to be the direction the world was going and I didn’t want to be left behind. In the end, the gamble worked marvelously as it brought me to where I am today. Despite absolutely loving web design, I’ll always be grateful for the solid foundation of skill and knowledge that print design afforded me.

Should You Switch Too?

For those of you who are still in print, this story sounds all too common. It seems more and more print designers are supposedly finding themselves in a transitional period. Work used to flow like milk and honey but now you find yourself scraping the barrel just to get by.

You’re faced with a major career decision. Should you too make the jump and attempt to reinvent yourself as a web designer? Can you even manage such a task after spending so much time in the world of print?

In my opinion, you can definitely do it, but the question of whether or not you really need to is a bit hazier. Anecdotal stories and isolated incidents are one thing, but major shifts in the design industry are another story entirely. Are print designers going to become extinct? Do they really need to face the music and crack open a web browser or are industry experts just crying wolf?

Print Survey: By The Numbers 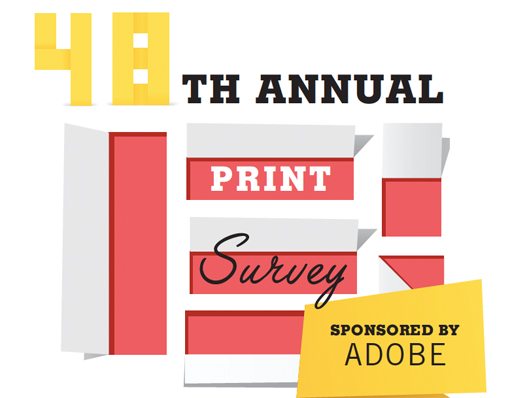 Can print designers hope to find gainful employment for years to come? It’s an important question and one that is far too often answered with a general statement about how everyone is “going digital.”

Let’s attempt a modicum of specificity and research these claims a little to see if they appear to hold water. To start off, I looked to the Graphic Design USA 48th Annual Print Survey (2011), which asks readers various questions regarding print design.

The results were pretty interesting. It turns out, 93% of respondents claimed to have worked on print design projects in the last year, compared to 71% for online projects, 58% for package design, 45% for POP/Sign, and 24% for motion-based projects. 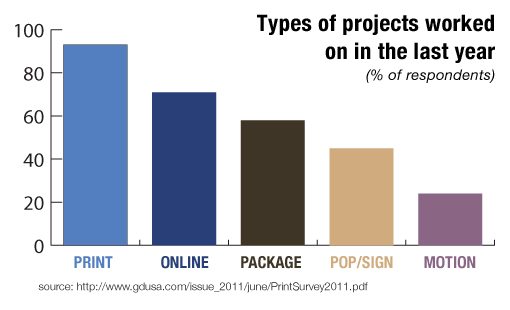 The top two most popular types of print projects were Brochures/Collateral and Direct Mail/Direct Response, with Sales Promotion, Identity/Letterhead and Print Advertising bringing up the next three slots.

The numbers above are encouraging for print designers, but they should be taken in context. Consider that this survey was given to graphic designers that subscribe to one specific printed magazine, a fact which could very likely skew the results towards favoring print simply because print designers might be more prone to subscribe to print magazines.

Further, as far as I can find, no information was given regarding the number of people surveyed or the general demographics of the respondents. Age would obviously be an interesting factor.

Finally, it should definitely be noted that, while most of the designers who responded have worked in print in the last year, many of those same respondents have done web design in that same period. This means that at least 71% of this audience possesses web design skills and are taking on web design clients.

According to one survey of graphic designers, print work is definitely still there and still a top wage-earner for lots of people. Let’s balance this information out with some projections from the United States Department of Labor.

“Graphic design wages in print are expected to fall 14.5%.”

If we look at the printing industry as a whole, the outlook isn’t quite as rosy. Wages in printing and related support activities industry are projected to fall 16 percent over the 2008–18 period, with employment in printing “expected to decline rapidly.” Graphic design wages in this industry are expected to fall 14.5% over the same period. However, graphic design is one of the few occupations in the print industry that won’t give way to automation any time soon and therefore still holds plenty of opportunities.

These numbers present an interesting contrast to the outlook for graphic design in general, which is expected to see a 13% increase in employment during the 2008-2018 period. This growth is almost all attributed to “graphic designers with Web site design and animation experience” though who will supposedly have the best opportunities while designers in print publishing face a reduced demand.

The information presented above is obviously skewed towards the United States. For starters, I lack the time or space to cover every developed nation on the planet and to be honest, I came up short in my search for hard facts for other locations regarding the rise or decline of print design jobs.

Various UK papers have spotty reports of print in decline but hard labor statistics for graphic designers are difficult to come by. My assumption is that U.S. trends are indicative of what is happening or at least what is to come for other areas of the globe as well. Feel free to disagree in the comments or post a few sources arguing either way.

As far as we can tell, many designers, perhaps even the majority are still reporting that they’ve worked on print projects within the past year. If you’re currently looking for work in this area, there’s no evidence to support the idea that you’re without hope. There’s still work out there to be done if you can find it.

Print designers will be around for a long, long time. If your legs haven’t atrophied from too much Facebook, take a walk outside in any city in the world. You’ll see signs, billboards, magazines, newspapers, bus stop ads and countless other real, physical objects that all have to be designed and therefore represent meaningful work for lots of people. Print designers won’t become extinct in my lifetime.

“The ratio of people looking for print design jobs to those offering them will likely continue to make this an extremely competitive industry.”

Unfortunately, there’s no doubt that the print industry is in fact taking a beating. Both wages and employment are on a downward spiral, which probably isn’t what you want to hear about your selected career path. The ratio of people looking for print design jobs to those offering them will likely continue to make this an extremely competitive industry.

The advice that I give to dedicated print designers is to first, know your field and know it well. Stand out from the competition by having more knowledge and experience and take care to remind potential employers that many of their candidates with a background in web design don’t know jack about offset printing, spot colors and the like.

Further, I recommend that you take a hard look at the print design survey mentioned earlier. If 91% of respondents work in print and 71% work in web, there is significant overlap that represents designers experienced in both fields in addition to the other areas such package, POP and motion design. There’s a strong argument for knowing one thing better than anyone but that doesn’t mean that you shouldn’t be expanding your skill set on a weekly basis to ensure that you remain employable in the long term.

“You won’t regret knowing some HTML and CSS, but you may regret not knowing it.”

If you found yourself out of a job or client-less tomorrow and browsing some career website like Indeed.com, you certainly wouldn’t regret knowing some HTML and CSS, but you may regret not knowing it (many web designers even get by without coding). Even if you’re currently gainfully employed, look around for print design jobs in your area and compare those to the availability and salary of web design jobs. If you don’t like the results, it may be time for a trip to the book store and a few months of weekend studying.

To sum up, print is not dead. Plenty of designers still make an impressively profitable career strictly from print designs. Further, print designers are not necessarily doomed. Most of us can’t yet imagine a world without printed products and we’ll always need people to design those materials.

That being said, diversifying your skill set can only be taken as good advice. Many or most of the new opportunities in the graphic design profession are coming from digital industries where screen size matters more than page size. Further, wages in print design in the U.S. are projected to decline over the next decade in direct opposition to wages for graphic designers overall, which are projected to rise.

If you’re a print designer, leave a comment and let us know what you think. Has it been harder for you to find work lately? Do you fear the transition to web design or even see it as a solution should you find yourself without work?