In Defense of Advertising

It’s on our clothes, in our houses and painted on the sides of our buildings. It flies high over our cities and can be found deep below our feet in subway tunnels. It’s so ingrained into the way we live that if it were to cease existing, the global economy and infrastructure would crumble in hours. Of what mystical force do I speak?

Advertising. In many American households this is a dirty word. We’ve come to hate this plague that has taken over our society and fear that it over-saturates our lives in ways that can only be destructive. Today I will cross the line and defend not only the industry as a concept but also those undoubtably evil people that participate in it.

Every single day, you’re bombarded with thousands and thousands of ad impressions. Some overt, some subtle, all meant to plant a seed in your brain that makes you connect with a brand, a product, a person and/or an idea. 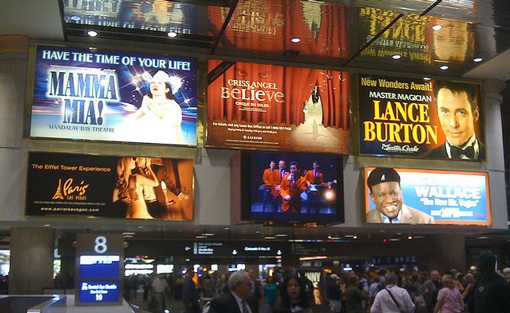 The vast majority of our population in America believes that they see too much advertising every day. They’re sick of the tactics, the messaging and the ceaseless competition. Interestingly enough, they’re not sick of free and cheap content.

Advertising dollars put satellites into space so that you can watch your favorite shows and stay up on news from around the world. These dollars build stadiums, keep highways clean and fuel the radio station you listen to on the way to work in addition to the websites that you frequent while you’re supposed to be working.

In short, advertising keeps the world as we know it spinning. It may be true that we’ve built our society to depend far too much on this system, it may also be true that too much advertising is damaging in some psychological way, and it’s definitely true that most advertising out there is utter crap. But does that mean it’s all bad? Are advertising, branding, and marketing all inherently an evil ideas? I hope not, because I absolutely love them.

Where Artists Go To Grow Up 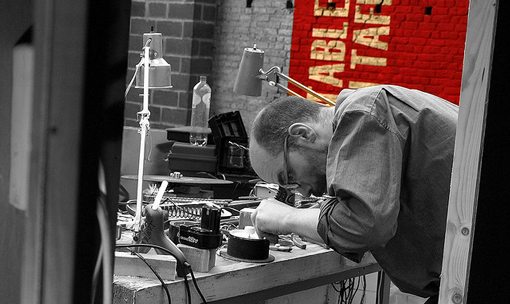 Humans have always viewed artists under an interesting light. If someone is creative, we see only two justifiable paths for their lives. The first is the starving artist. This group of people remains undiscovered for their whole lives, avoiding actual income or work of any sort while desperately clinging to the notion that they were born different and deserve special attention because they can paint a picture, strum a guitar or sing a song.

In any other individual, the lack of productivity over a lifetime would be a negative trait, but we let artists get away with it because they are tortured souls who deserve something better.

The second scenario involves the artists who get what they deserve: fame and fortune. We idolize them and part with our hard earned money to own their work because it enriches our lives in some supposedly unique way. The artist is doing what he was born to do and making a fortune, the world is as it should be.

What happens when a creative person realizes that fame and fortune are out of reach? Not everyone is fit to live in a ratty New York studio apartment, whining about how the world doesn’t appreciate them. Isn’t there a third option?

Indeed there is, and it’s called advertising. Creative people can “sell their soul” and join the oppressive machine of industry and business. The result is that we become productive human beings with a never ending outlet for our creativity. Is that so bad? 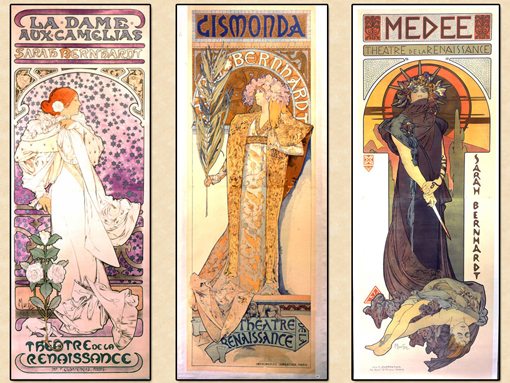 Artists have been involved with advertising for as long as there has been advertising. One prominent example is Alphonse Mucha, who created the image shown above. The art of Mucha and his contemporaries is studied and exalted in any art history class covering 19th and 20th centuries. Who was Mucha? Basically, he was a graphic designer who created advertisements. Looking back, we think his work is more art than ad, but the distinction used to be much finer.

Mucha’s work is still wildly popular today. Very few seem him as a sellout or some insignificant cog in an evil machine. He was an artist who found a great way to make a living doing what he loved to do.

The Rise of the Creative Director

I recently watched a fantastic documentary called “Art & Copy.” One particularly interesting part of the film was that it depicted the rise of the creative director from someone fairly unimportant and replaceable to the person running the company.

Creative people used to be far under the marketing people in the hierarchy. You were given a message and a goal and you simply kept your mouth shut and created the graphics. Eventually, according to the film, someone had the crazy idea of putting the copywriter and the art guy in the same room so they could collaborate.

This eventually led to more effective ads that leveraged visuals and text equally and synergistically, ads like the campaign that took a little ugly foreign car and turned it into an American icon. 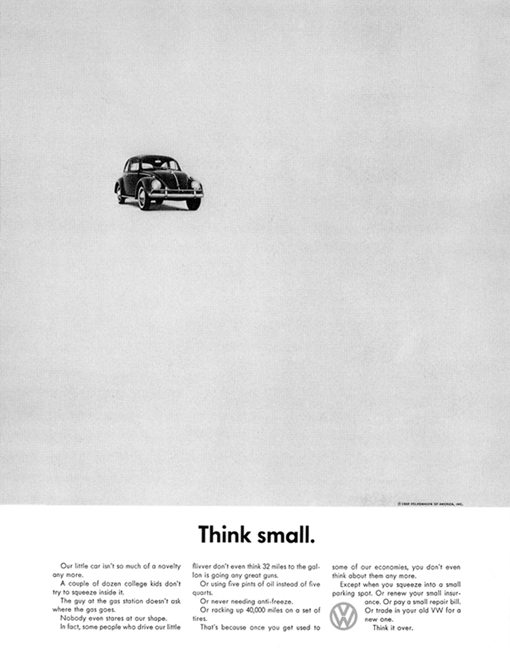 The influence of this 60s ad campaign is still seen today! Notice the simple solid background and how it really highlights the product design. Clean lines, plenty of whitespace, great use of contrast and a simple typographical statement. Have you seen anyone else following this formula? 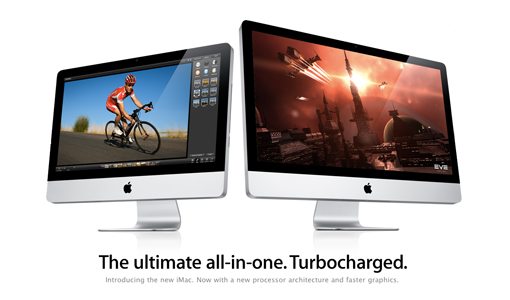 This is what happens when you let creative people run advertising campaigns. We go beyond selling a product based on a bullet list of features. We sell a lifestyle, a concept, a set of ideals that people can identify with. In short, we create a brand.

Back when I used to do retail design for a living, the very first brand that I ever worked with was Pedigree dog food. At the time, the brand had a few guidelines that were almost purely aesthetic: use this color yellow, these fonts and try to find dogs that look happy and energetic. There really wasn’t much more thought to it than that. I was just the guy building coupons and store signs so I had literally no say in the matter, but always thought that the company could do much better.

Then one day Pedigree hired TBWA\Chiat\Day (the company behind the iPod silhouette campaign and the famous 1984 Mac commercial). These guys came in and changed everything. They did more than find and leverage Pedigree’s competitive advantage, they literally redefined the entire company! This is a pretty lofty goal for an advertising firm don’t you think?

Just about every dog food brand at the time was selling science. Our dog food has this vitamin and that mineral and it will make your dog’s coat shinier and give him more energy. If you think about it, this is a fairly cold and impersonal way to sell products for man’s best friend.

Chiat realized that there was a void of emotional advertising in the dog food industry. So their idea was to to take Pedigree from a dog food company to an entity that openly loved dogs and cared for their well being. The new slogan for the company said it all “Dogs rule.”

They launched the “Pedigree Adoption Drive,” a campaign that used money from dog food sales to get dogs out of cold, lonely shelters and into warm, loving homes where they could be someone’s friend. 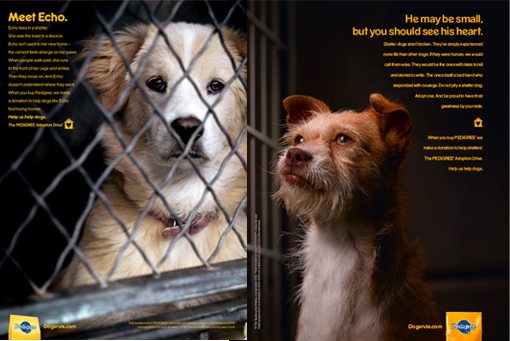 This completely changed the way I sold dog food in my ads. Suddenly, I was able to truthfully tell people that by merely purchasing Pedigree dog food for their own pet, they could help save the lives of dogs everywhere. Everyone with a dog needs dog food anyway, so why not make that weekly purchase something that can make them feel good about themselves? Why not turn Pedigree into a company that thinks and identifies with its customers at the most obvious level (loving dogs)?

In my opinion, the Pedigree campaign is good advertising (that doesn’t have to be an oxymoron). It’s attractive, interesting, effective and most of all, truly identifies with its target audience. I’ve literally seen Pedigree commercials bring people to tears.

All because Pedigree listened when a couple of creative people said they had a new way to sell dog food. This is why I love advertising. For the challenge, the creativity, the emotion, the fun and the raw power it has to truly change the world.

Another great example of this kind of advertising is Dove’s Campaign for Real Beauty, which teaches women and girls that they don’t have to be like the anorexic, Photoshopped supermodel on the magazine to be beautiful. Ultimately, the point is to sell soap but the result was a worldwide outreach that actually empowered women in an area that they struggle with perhaps more than any other: self-esteem. 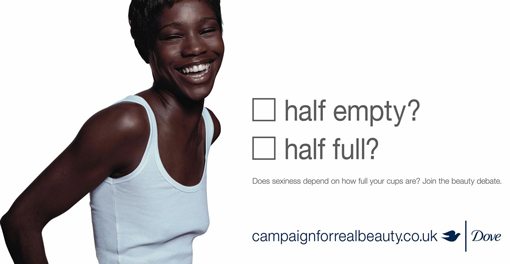 Can you honestly define these types of campaigns as destructive to our society? Sure, they help someone make a buck but again, remember that those dollars make the planet spin. If advertising is a necessary evil, let’s end the debate on the “necessary” part and attack the “evil.”

Not every company will have a budget like Pedigree or Dove, but that doesn’t mean that you can’t help them create effective advertising that, at the very least, makes their portion of the world a little more attractive and at best makes an honest appeal to basic human needs.

How Can I Make a Difference?

As a designer, you were born for this stuff. There’s no reason that you can’t absolutely love your job designing web banners, billboards, business cards or whatever it is that you work on. You just have to learn to see the potential that you have for making the world a more interesting place, if only on a tiny scale. Stop whining about how much advertising sucks and use the amazing gift of creativity to fix the problem where ever you can.

If you’re still unhappy, dream big. Set a goal to be that hotshot creative director who runs Coca-Cola’s brand team or venture out on your own, start a business and fall in love with helping striving companies reach their goals.

Great advertising is a lofty idea. It might be often sought after but it is rarely achieved. If everyone in commercial design stopped pointing fingers at the guys in the marketing department and diverted that energy into pushing clients away from something that everyone will ignore and towards something that no one can ignore, we might just change the world.

In closing, the world hates the thought of advertising while simultaneously being entranced by it. More and more, we look forward to the Super Bowl not for the game, but for the amazing commercials! We cry out that advertisers are bombarding us with too many messages even as we tattoo brand logos to our arms and wrap our children in t-shirts that display the name of our favorite motorcycle company or comic book hero.

The truth is, we all love advertising. What we hate is bad advertising: the guy on the car commercial screaming at us to buy now before it’s too late, the political campaigns that sling mud at the opposition and the cartoon characters that sell obesity to kids.

The purpose of this article is merely to convince you to watch your rhetoric. Advertising gives good work to great people and in the right hands it can even be a positive force in the world.