Then and Now: The Evolution of Cereal Mascots

Today we’re going to have some good old nostalgic fun and take a walk through cereal box history to look at some beloved characters that have been with most of us since we could chew.

Keep reading to see what your favorite cereal box mascot looked like years ago versus today!

Why the heck are you reading about cereal boxes on a design blog? The simple answer is, I happen to love cereal. The other day as I was chomping down on some delicious Raisin Bran I found myself doing what everyone does when they eat cereal: looking at the box. This led me to realize that I’ve spent a healthy chunk of my life simply staring at cereal boxes while I eat breakfast (or lunch, or dinner, or a late night snack).

When I was a kid, I used to mostly play the games on the back and compare the nutritional information with the cereals my brothers were eating (the higher numbers always win). These days I tend to gravitate toward design while I stare. The typography, the photography and most of all, the illustrations. On the rare occasions when I neglect to purchase an “adult cereal” in favor of something sugary, I always think about the characters on the box and how they’ve evolved over the years.

As a designer, understanding generational trends is an important skill and cereal boxes provide an excellent study in retro illustration styles. Thinking about these characters will help you mentally define what makes an illustration seem modern and what makes it seem aged.

Then the next time a client asks you for a retro design, I guarantee you’ll find yourself thinking about Tony the Tiger or Cap’n Crunch!

They’rrrre great! Who doesn’t immediately think of Frosted Flakes upon hearing that exclamation? Tony the Tiger was originally created in 1952 by Eugene Kolkey. The original design is quite different than the character we know today, have a look: 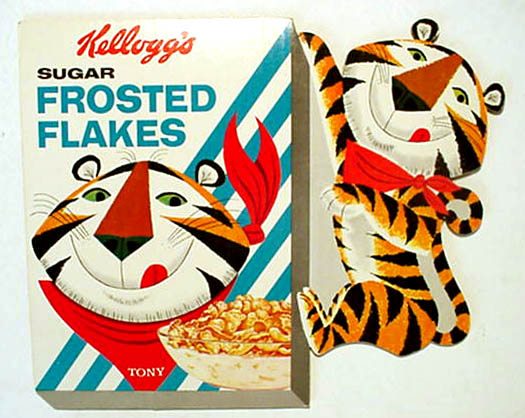 As you can see, Tony (or perhaps this shows Tony Jr?) used to look a little more like a cat than he does these days. Granted, the last time I checked tiger heads weren’t shaped like a football, but the concept still holds true. Compare this to the very human-like character we know today: 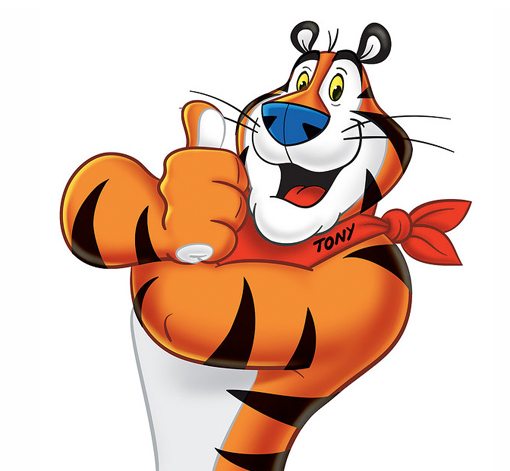 Just look at that guy! He went from a cute cat to a superhero! Tony is a perfect example of a trend that you’ll see over and over throughout this post: anthropomorphism. This is a big, fancy word that simply means to take a non-human and impose human characteristics upon it.

The goal of the original illustration seemed to be to take a tiger and make it more friendly, less ferocious and slightly more human in the process while still keeping much of the “cat” identity. Today, Tony has been completely rethought so that he has the basic muscular structure of human being. It’s almost as if this Tony started human and was given Tiger-like characteristics, the reverse of what we saw before.

There are definitely some other trends as well. Notice the use of gradients in the new Tony to add more depth and realism. 1950s illustrations definitely have a flat look to them by comparison. Tools like Photoshop and Illustrator have made it easier to add these kinds of details to artwork and I would wager that printing technologies had something to do with it as well.

Also notice the shape of the eyes in the new Tony: they’re oval and quite elongated. Many of the other characters we’ll see started with oval eyes, but they’ve become even more elongated over the years which gives a more interested, excited appearance to the characters.

Finally, the overall line thickness of the underlying character framework has increased pretty dramatically. Occasionally, older characters had little to no noticeable outlines and were just defined by colors and patterns. Today we really emphasize the thick, marker-like strokes of the basic line drawing.

Toucan Sam was created by Manuel R. Vega in the early 60s as the official mascot of Froot Loops. Can you spot any similarities and trends that we discussed before with Tony in the original Sam? 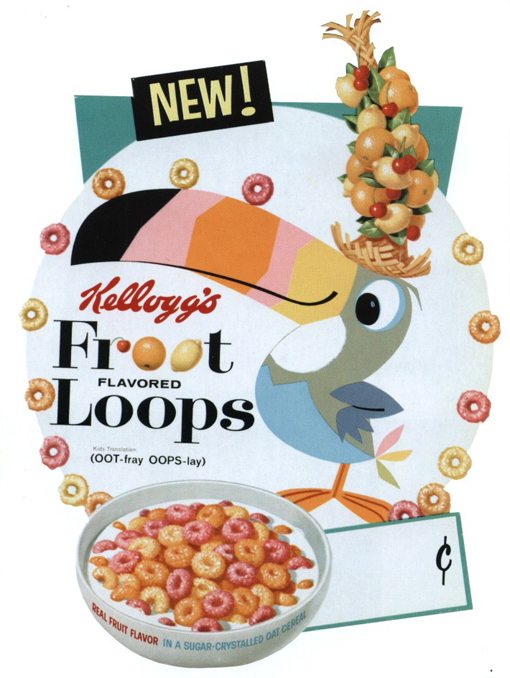 Once again, we can definitely notice a lack of black, defining lines. For the most part, Sam is comprised of solid color fields (no gradients) that sit right up against each other. Notice that Toucan Sam isn’t a very high fidelity drawing but is instead composed of extremely simple shapes.

Don’t make the mistake of ever thinking that artists simply weren’t as talented back then, they were more than capable of drawing a realistic toucan! Instead, it was a stylistic decision to keep these characters simple in nature.

Here’s a look at Toucan Sam as we know him today:

The transformation of Toucan Sam is conceptually almost identical to that of Tony the Tiger. First, notice the anthropomorphism: his body shape, wings and feet are much more human and less bird-like than they used to be. The colors and shapes are also no longer simple, instead we see gradients, highlights and a more complex structure.

We can clearly spot the underlying lines as well. They’re more subtle than we saw on new Tony but still much more defined than the old Toucan Sam. Finally, take a look at the eyes. The original Sam had oval eyes but they weren’t nearly as elongated as they are in the new Sam. This definitely gives him a more hyperactive and excited appearance, which is furthered by the action that has been infused into the scene. The old bird was pictured standing still while the new one swings into the scene on a jungle vine to present you with your breakfast.

Horatio Magellan Crunch, more commonly known as Cap’n Crunch. He’s been selling overly sweet breakfasts to children since the early 60s and is now in fact owned by another of my favorite sugar peddlers: Pepsi.

Long ago, Cap’n Crunch seemed a bit more fragile and old than the robust sea captain that we know today: 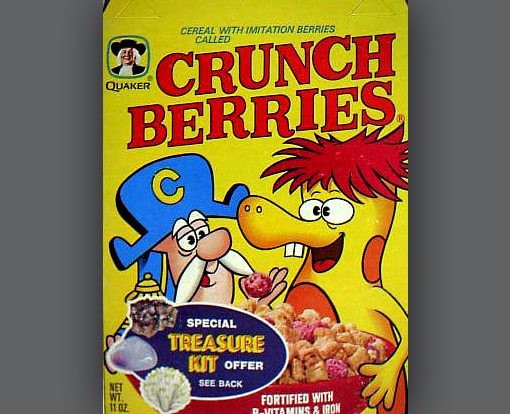 Notice though that this particular illustration is quite modern in its characteristics, we can see how illustration styles are evolving into what we know today. The old Cap’n has thick lines and even some impressive shadows!

There’s one particular aspect of this illustration that catches my attention immediately: the eyelids. Notice how the inclusion of eyelids onto this character has given him a old, droopy-eyed look. This is actually pretty common in cartoon characters around this time period, especially for character who were supposed to be old or lethargic. Let’s look at today’s Cap’n. 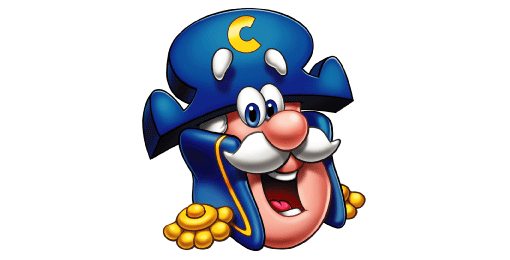 Here we also see gradients taken to the extreme, and eyes that form much taller ellipses. There’s an odd sense of overlap too: the eyes overlap each other, the eyebrows are pushed much further up into the hat, etc. Have you ever thought about how ridiculous it is that Cap’n Crunch has eyebrows over his hat? I sure have.

Joe Harris created the Trix Rabbit right before the start of the 60s. If you haven’t noticed, a clear pattern is emerging here. The early 60s were apparently the height of cereal mascot creation, that golden age when advertisers realized that they could use cartoons to target children and sell more food.

The original Trix Rabbit is a lot like old Toucan Sam in that he’s an incredibly simple drawing. As a curveball this time though, he has a remarkably thick outline: 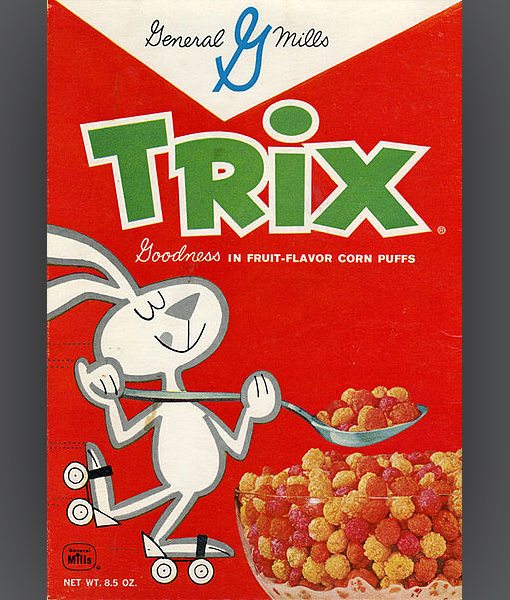 Compare this rabbit for a moment with today’s Trix rabbit and you’ll get a perfect picture of what the 90’s did to cartoon characters: 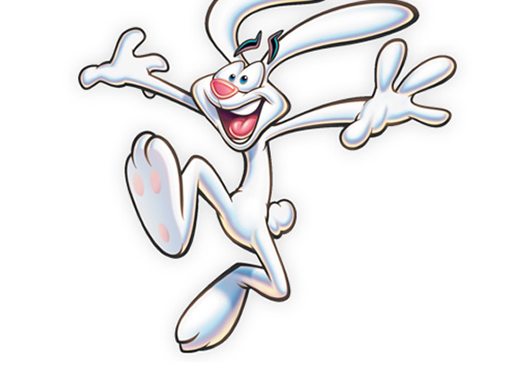 Once again like Toucan Sam, The Trix Rabbit went from being fairly relaxed (despite the skates), to looking like he was just released from the cereal mascot loony bin. Notice not only the eyes this time, but the wide open mouth. Now go back and look at the other mascots and see if you notice a trend: Toucan Sam and Tony the Tiger both went from closed mouth characters to those with wide open jaws. Even today’s Cap’n Crunch has a much bigger mouth than the original.

Finally, despite the fact that our strokes are actually lighter this time around, the darkness is definitely more pronounced and we’ve scrapped uniform lines for more organic marker strokes with plenty of contrast between the thicks and thins.

Now that we’ve discussed some popular illustration trends, let’s finish of with a quick look at some more characters. Can you spot the same trends in these the evolution of these other characters? 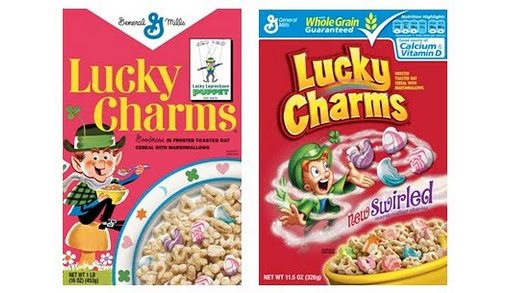 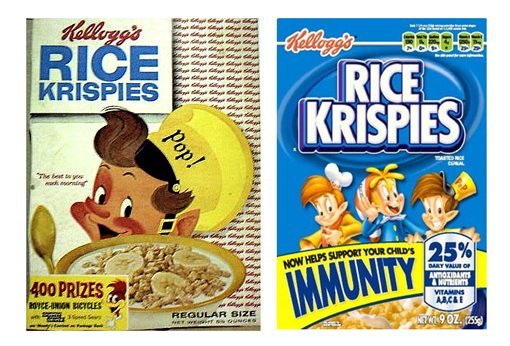 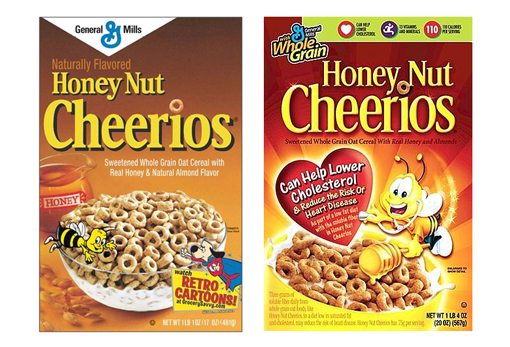 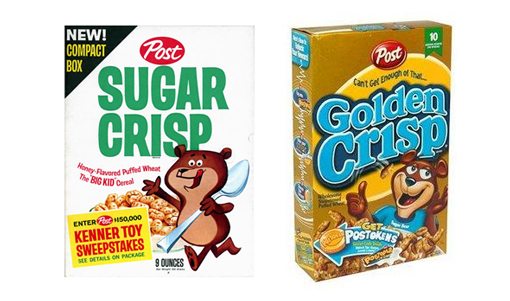 If you’re interested to hear more about how these characters came to exist and even see more old/new comparisons, check out Accelerator Advertising’s great article on the topic: Top 10: Cereal Characters.

I hope this walk down memory lane has gotten you all teary eyed longing for the golden age of cereal. More importantly, I hope you’ve learned a thing or two about illustration styles in the 1950’s and 1960’s and how they differ from popular styles today.

Leave a comment below and let us know who your favorite cereal mascot is! How many can you name off the top of your head without checking Google?

A Note About Images: I discovered during the writing of this post that cereal images are incredibly difficult to find. I’ve tried to be respectful and link to the original sources for the various images in the post, but the true original sources are often impossible to hunt down. If I’ve used an image that you own, leave a comment and let me know if you’d prefer that I give you credit or take it down.