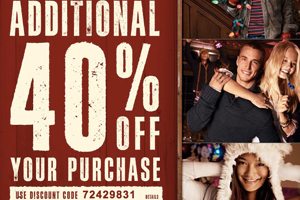 Last week our U.S. readers celebrated Thanksgiving and its subsequent shopping madness known as Black Friday, where retailers dramatically reduce their prices for a day of pure shopper mayhem.

Instead of joining the stampede of frantic shoppers, I followed my annual tradition of hiding away in my home office. However, I couldn’t resist a look around to see how various stores were handling the design side of the event. Let’s see which top name retailers pulled out all the stops and which ran with cliché, generic and even ugly designs.

Let’s kick off this list by looking around at some of the Black Friday sites for big name brick and mortar retail stores with an online presence.

I’ve long respected the Target creative team as some of the best in the retail industry. From television commercials to junk mail, Target has a history of good design. They’re also one of the leading hype-builders for Black Friday. Consequently, I had high hopes for their site on Friday. Unfortunately, this is what I found: 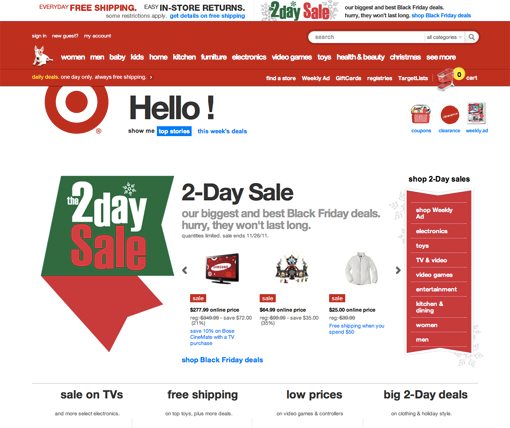 To be fair, it’s not horrible, it’s simply not what I’ve come to expect from Target. If I had to use one word to describe this, it would be “weak.” It’s not bold, exciting or even well laid out. It’s a clutter of objects that don’t fit well together and don’t highlight the sale very well. 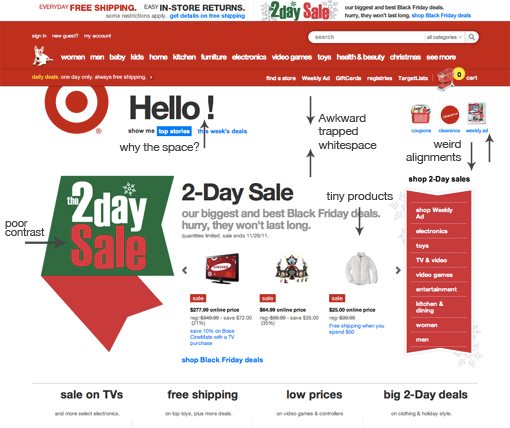 Above you can see just a few of my thoughts as I look at this page. The products and prices are the hero of any Black Friday sale, here they’re lost in the mess. Further, the entire page is filled random alignments and poor whitespace distribution.

Sorry Target, I’m not a fan. Better luck next year.

It may be necessary on some level for super retailers, but I simply hate the banner-driven web design on sites like Walmart. Nothing looks integrated, nothing matches; the entire header looks like a collection of the type of banner ads we’ve been trained to ignore.

Walmart’s Black Friday page held true to this legacy. However, you can’t really expect the entire site to be redesigned for the sale so it’s probably not too fair to judge this round of designers for anything more than the two banners in the middle. 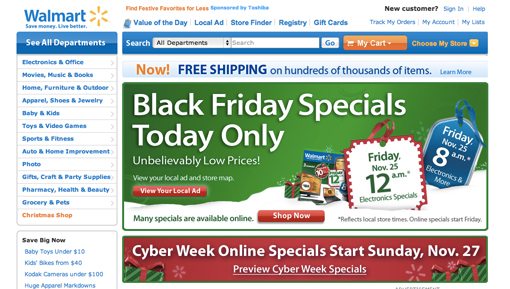 As with Target, these aren’t necessarily horrible, but they’re certainly not impressive either. Here’s a close-up of that main ad:

I get the message pretty quickly and it’s clearly meant to get me thinking about Christmas shopping. However, the typography could be a lot better. The progression from big to small as you read down the page is awkward and the two lines in the headline are distinct statements and could use some differentiation.

Further, there are several points where the layout seems crowded, the snowy edge in the background randomly goes from blurry to crisp, the button treatments are ugly, and the way the separate times are presented is a little confusing.

Kmart & Sears are in the same family of retailers and both of their sites suffered from the same problem. Everything in the main banners of these sites was either one big image or a series of small ones, text included. We moved beyond these types of practices ten years ago.

They weren’t just images either, they were ugly, pixelated, low-resolution images that looked like they had been compressed to near death. Here’s a tip, if you want to cut down load times, try using live HTML content. 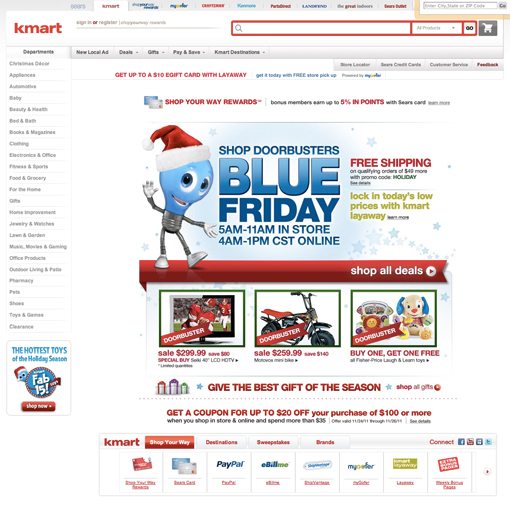 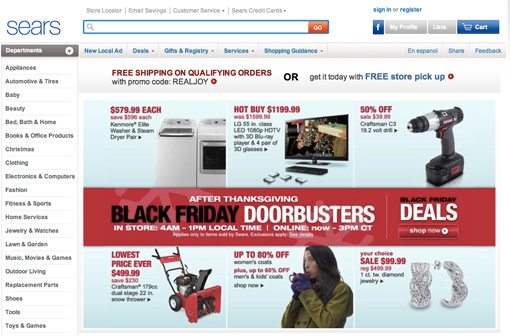 Best Buy for the Win

Of the big name retailers, most were pretty disappointing. However, they weren’t all bad. Best Buy, for instance, made a really strong showing. Their page featured a clean and modern design, was completely void of clutter, had a friendly and welcoming environment, and clearly delineated the various sales categories with easily recognizable icons. 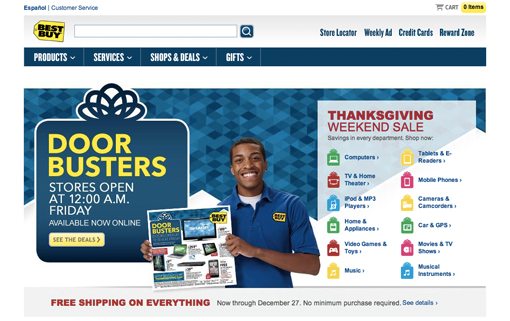 To anyone who wants to argue that big retailer sites simply can’t pull off a good design due to the restraints of this type of medium, Best Buy’s page stands tall as a big fat, “you’re wrong” statement.

Toys R Us
Toys R Us was of course silly and cartoony. I was tempted to not like it but given that it’s for a kid-centric audience (adults shopping for kid stuff), it’s a pretty good direction and definitely seems to fit their familiar brand. 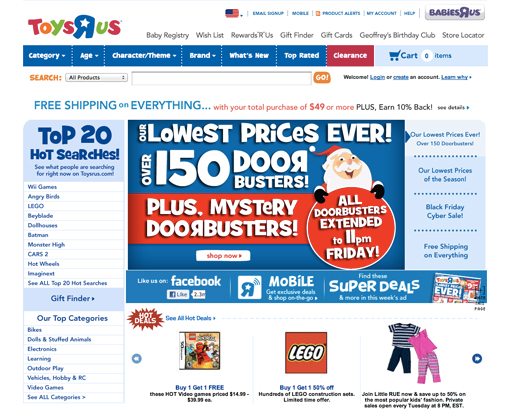 Radio Shack
Big red background with white accents, hero product shots; this is what I expected from Target! There’s plenty that I wasn’t crazy about on the site, but the main portion shown here seems to work well. 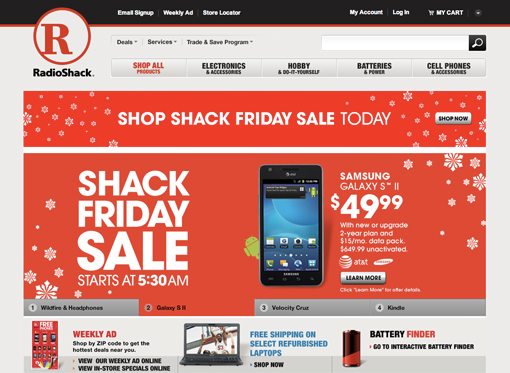 Kohl’s
Kohls’ showing was a little awkward. It seemed like it was just slapped onto the site over the normal content. It definitely didn’t feel integrated or particularly attractive. 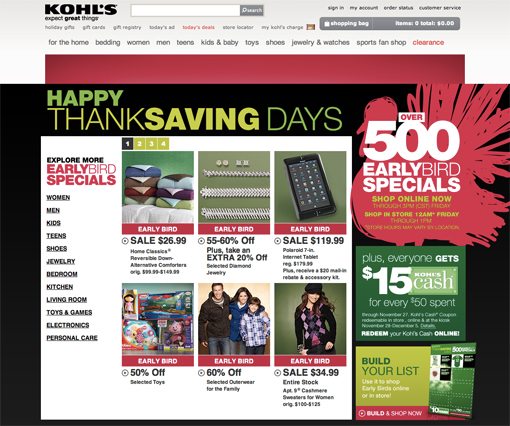 Office Depot
These guys easily had one of the ugliest Black Friday themes that I found. Sunbursts everywhere, hideous color palettes, type treatments from 1995, I’d go on but I don’t want to look at it anymore. 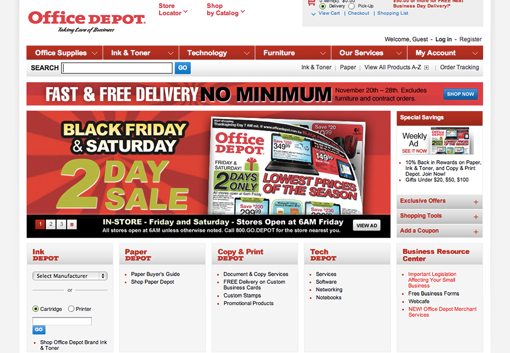 Here we’ll take a look at how three major computer retailers handled the aesthetic of their Black Friday sales.

Apple is of course no stranger to good, clean design and their Black Friday showing is was no exception. It wasn’t by any means groundbreaking, but it stayed right on brand, communicated its message nicely and of course highlighted those always gorgeous product shots. 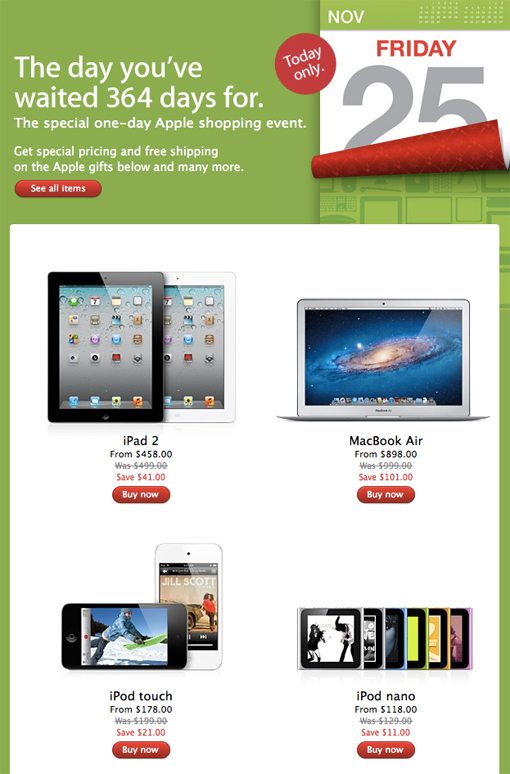 Apple of course wouldn’t let a sale take over their whole site so this appeared about a quarter of the way down their store page, which was a bit awkward but overall I think it worked well in the grander design scheme.

Dell chose to take a very minimal, low hype, high class approach to Black Friday. The home page was simple and the contrast combined with generous whitespace made the main banner super attractive. 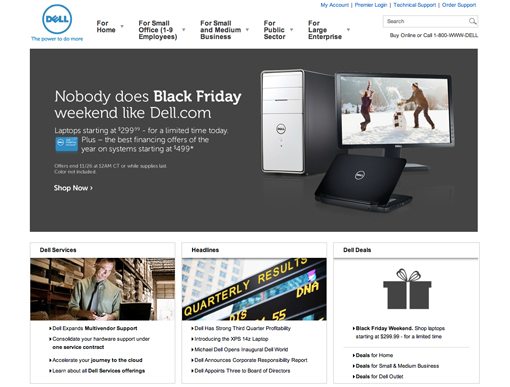 They took it a step further and customized the shopping experience as well. Their store was overhauled to heavily feature their top deals, complete with countdown timer and sold out notices. I may be an Apple man, but I can give credit where it’s due and Dell really made a stellar effort here. 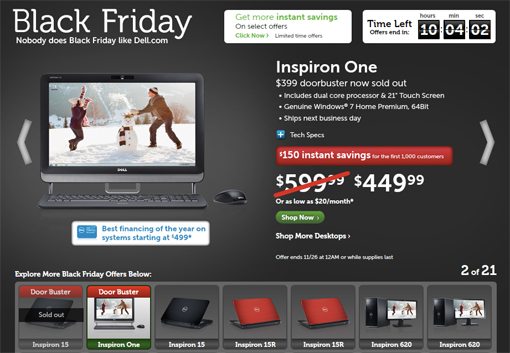 I couldn’t get past HP’s refusal to center their container long enough to really evaluate the site, but that alone tells me that great modern web design isn’t high on their list of priorities. Seriously though, the Black Friday graphics were nice enough but this store as a whole needs some major work. 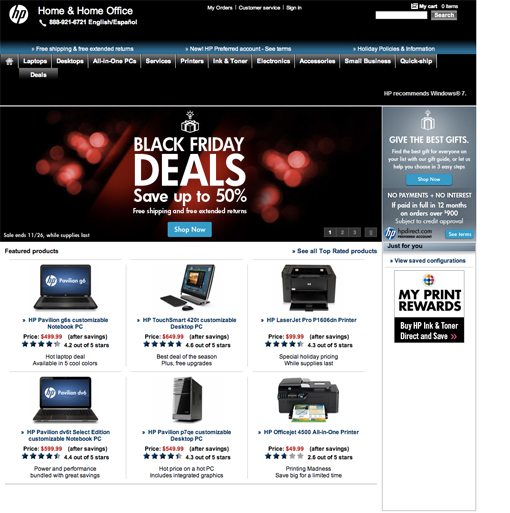 The last section of Black Friday sales that I decided to check out was fashion. I figured if anyone should have a strong visual aesthetic it would be companies who literally sell style.

This assumption turned out to be spot on. The first site I checked was American Eagle and it was a breath of fresh air. Finally, someone had made a decent effort to go all out and just create a beautiful Black Friday homepage. 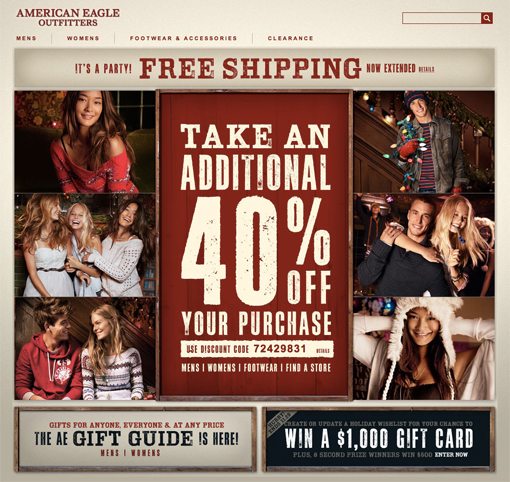 Smiling faces everywhere, great colors and a super simple layout help push this design into the major leagues. Also, look at that awesome and huge 40% off banner in the dead center of the page. Some designers seem to think that you can’t announce a sale using anything but design treatments devised when Saved By The Bell was still on the air but it turns out they’re wrong, you can in fact make a big, bold sales announcement and not compromise the design one bit.

Abercrombie followed suit in its own overly dramatic and “too cool for school” way. The ripped man-chests that define Abercrombie design might make this lazy desk jockey feel like a pitiful excuse of a man but their design is always very stylish and conveys a premium and high quality feel. 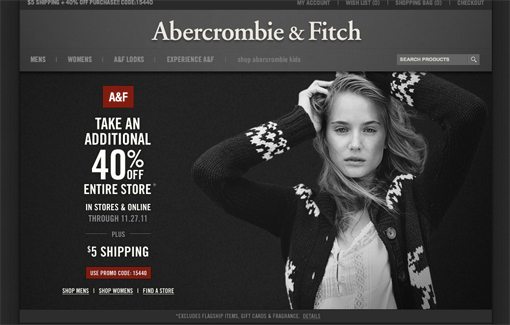 I would’ve probably never center aligned that big column of text on the left but in all honesty I think it looks great. This skillful variation in font size is exactly what I meant earlier when I was ripping on Walmart for horrible typography.

Abercrombie stores are still so filled with gag-inducing cologne and hormonal teenagers that I won’t go anywhere near them but their designers are star players. 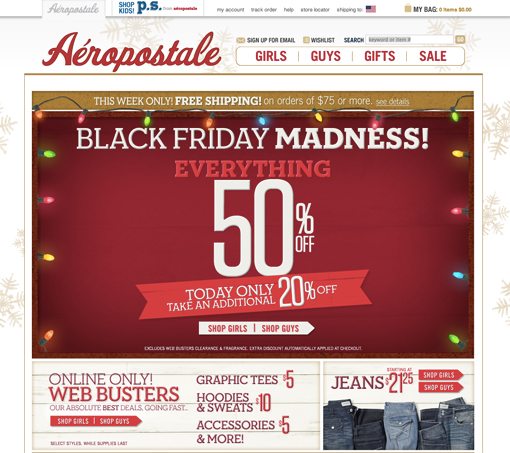 I’m not personally ready for washed out over-flashed photography with blown highlights to be a cool thing but girl stores like Forever 21 and Urban Outfitters have their own aesthetic that people like my wife seem to love. Their Black Friday page seems in line with this increasingly popular style and at least has a strong simple layout. 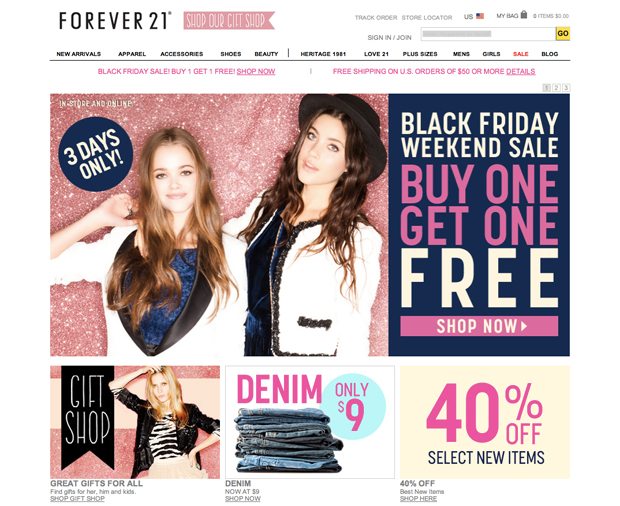 Not everyone in the fashion industry is aiming for high class design, take Old Navy for example. These guys are always hit or miss with me. Walking around their stores, I love their vintage lettering, grungy textures and great design metaphors. Projects like this one though simply don’t resonate with me. At the very least, it highlights the low prices really well, if you can look past the ironically cheesy but still annoying gimmicks long enough to read them. 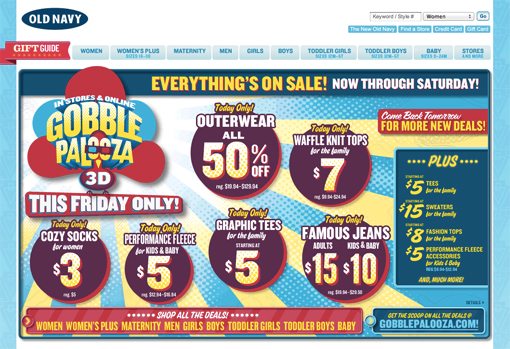 If Big Friday is the biggest shopping day of the year, it follows that retailers would spend the most time and effort making sure their sites are perfectly primed to get you to join the fray and blow your paycheck.

Some players stood out and really showed the talent of their design teams. Best Buy was clearly a leader in big box stores, Dell was surprisingly quite stylish in their presentation and American Eagle showed that you can throw a sale in someone’s face while maintaining a friendly, gorgeous design. Others however ranged from mediocre (I’m looking at you Target) to horrible (Office Depot just needs to apologize).

Leave a comment below and let us know what you thought of Black Friday design this year. Were there any retailers that stood out to you in a good or bad way? We want to know!