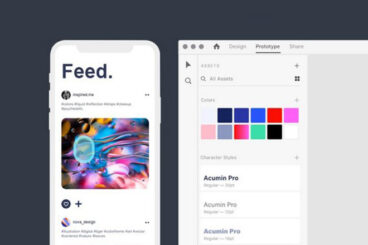 Rapid prototyping is one of the most important segments of the product development process. It’s what ultimately decides how your product will perform and how it will be received by the end-user.

Whether you’re working on a mobile app or website design, rapid prototyping should be part of your project. It will help you avoid catastrophic product launches as well as avoid the embarrassment of delivering a broken design to your clients.

What is Rapid Prototyping?

Just as the name suggests, rapid prototyping refers to the process of creating fast, simple, yet functional prototypes of a product for testing purposes.

Simply put it’s about creating a functional version or concept of your product (app, software, user interface, website, etc) to see how it will perform. It helps you to see your design in action. As well as get feedback before start working on the final version of the product.

However, a rapid prototype is not a fully functional prototype. It’s simply the barebones of the product that only includes the core functions like navigation, structure, and interactive elements.

What is Rapid Prototyping Used For?

Imagine working on a website design. You come across an issue that breaks an important function on the site. You find a solution to this issue and finally deliver the project to your client.

A few days later you get an angry call from your client saying there’s a site-breaking issue. Apparently, your fix doesn’t work for several browsers and platforms. And the client has lost a lot of business and reputation because of this.

If you’ve had used a rapid prototype to test your fix on multiple platforms before delivering the project, you won’t be having any frustrations like that.

Avoiding mistakes is only one of the many benefits of rapid prototyping.

The main benefit and the goal of rapid prototyping is to be able to test your design in action. Your ideas for cool interactive elements and design concepts may look great on paper but they may also interfere with the user experience.

With a rapid prototype, you can put your concepts to test and get feedback from users and clients.

As a designer, rapid prototypes also help you have clear communication with the developers as well. Rather than having to explain your design decisions, you can show them to developers. So that they can get a clear idea of how to develop the final product.

More importantly, it allows you to see your wildest ideas and design concepts come to life. And to share your vision with the team.

Making a prototype out of a design usually involves a lot of coding. And it’s not an exciting process for designers. But, thanks to modern rapid prototyping apps, you can now craft simple prototypes without having to write code.

These are some of the best apps designers can use for rapid prototyping.

If you want to use a flexible app to craft simple prototypes on a budget, Figma should be your first choice. It offers a very generous free plan for individuals and it works on your browser.

With Figma, you can both design and prototype. It has an innovative user interface with an easy drag and drop editor. You can use it to design prototypes with fluid functionality full of interactive elements and streamlined experiences. 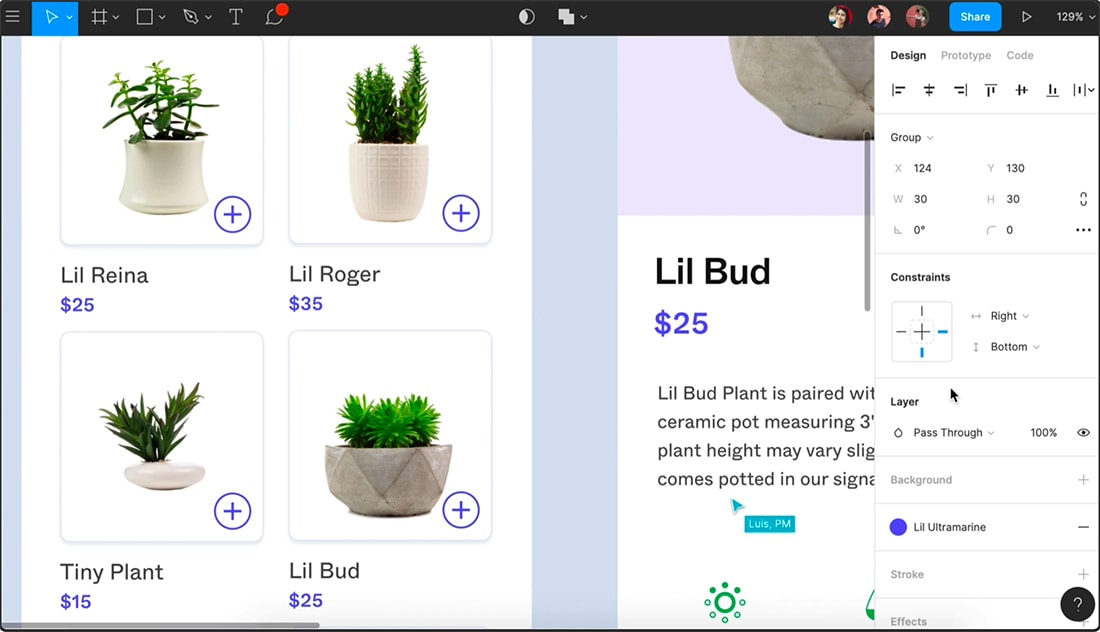 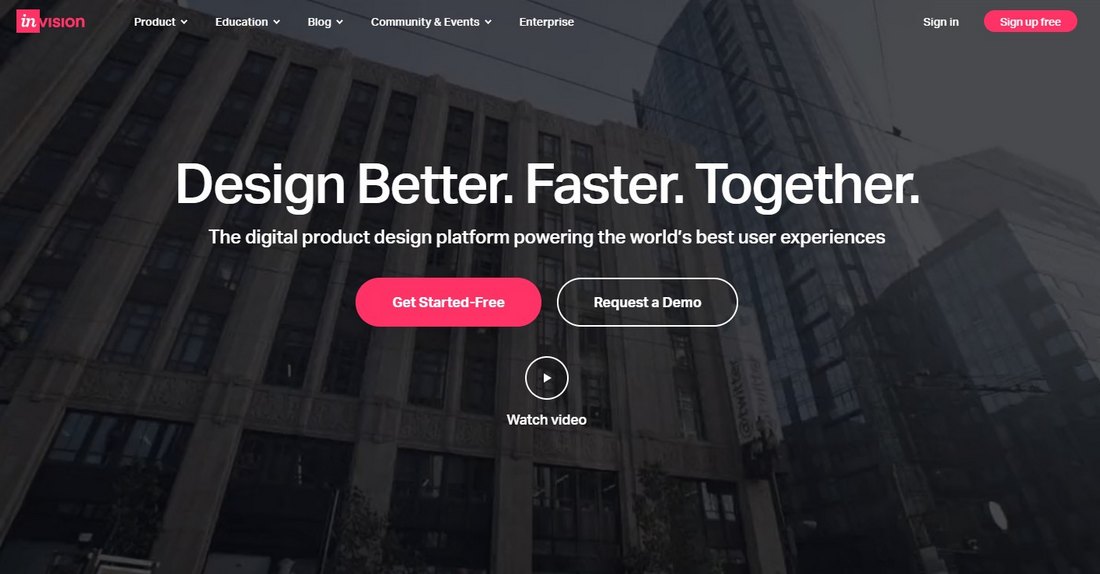 InVision is another popular tool that specializes in prototyping. It includes a selection of tools you can use to draft, design, and prototype together with your team.

Similar to Figma, InVision also offers an impressive free plan for small teams, giving access to up to 10 active users. It also lets you gather feedback directly within the prototype to easily identify issues and implement improvements. 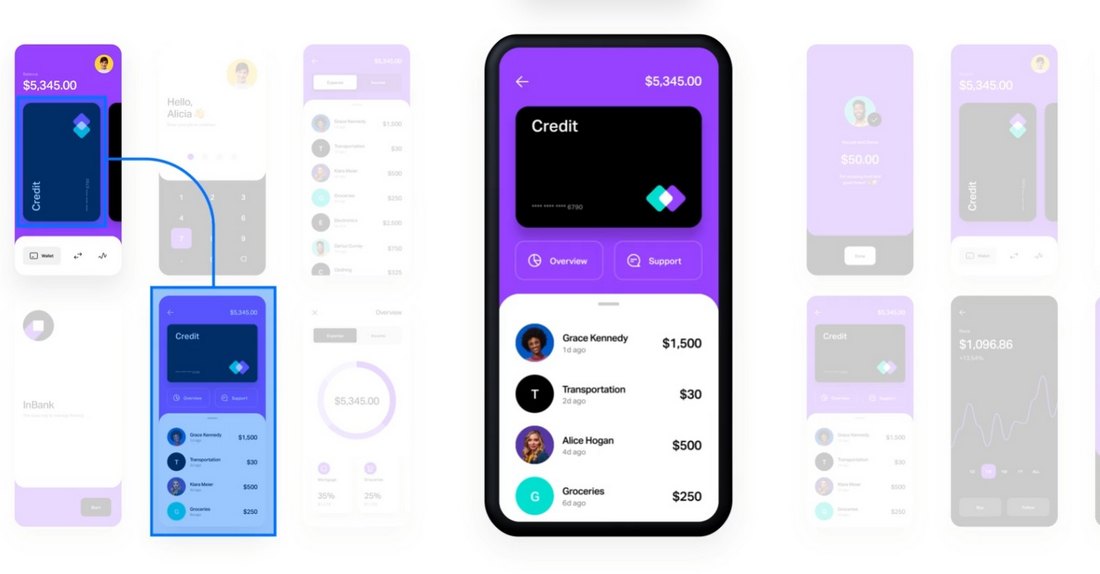 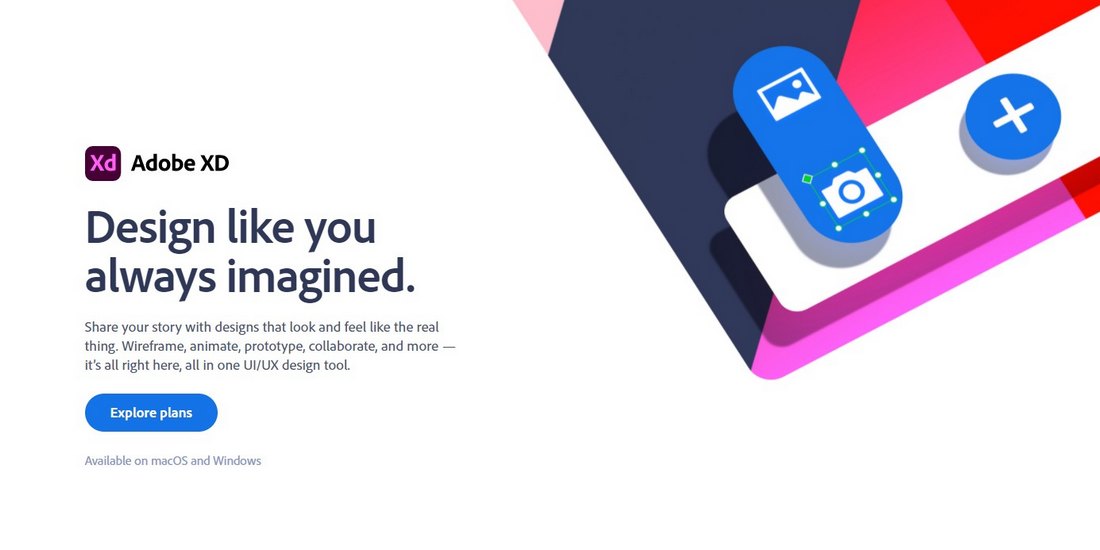 While Adobe XD is best for UI and UX design, you can also use it to craft rapid prototypes. It’s especially useful for creating simple prototypes out of UI designs that you’re already working on.

Adobe XD is a well-polished app for designing user interfaces, mostly for mobile and web apps. After completing a design, you can quickly add animations and interactions to create a rapid prototype and share it with your clients.

The Adobe XD free plan is more than enough for freelancers and individuals. It lets you have 1 shared document, 1 additional user, and 1 shared link. For teams, there are plans starting at $9.99 per month 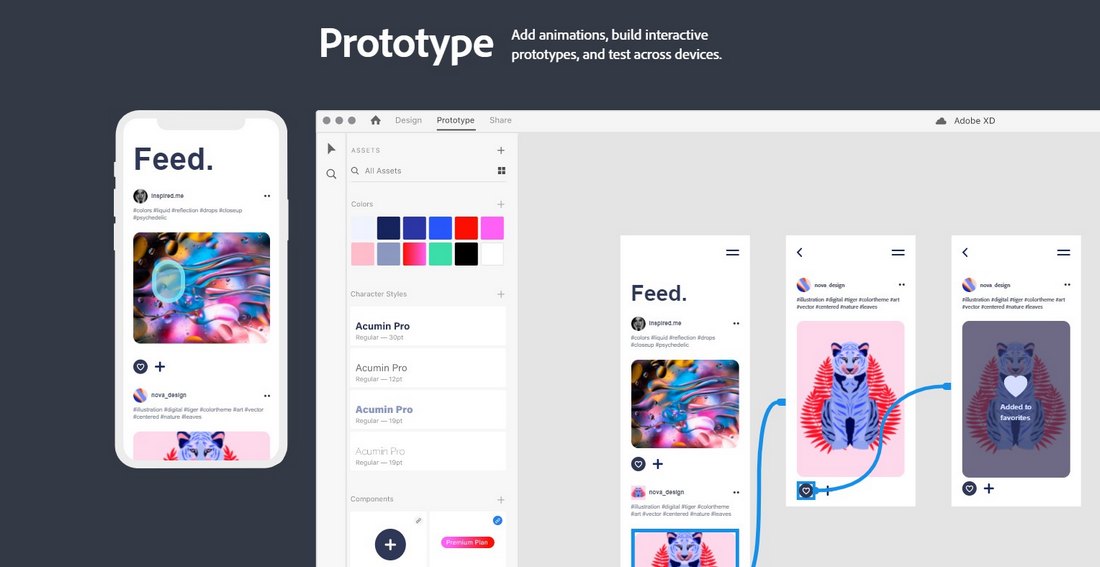 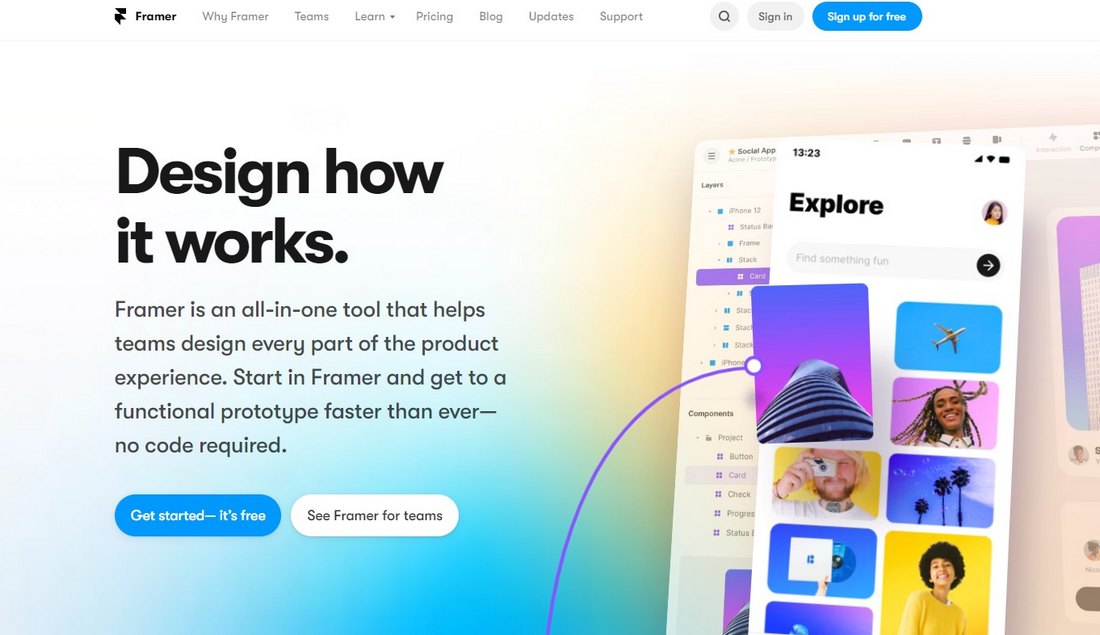 If you’re on a budget and looking for a free prototyping tool, Framer is one of the best options you can use. The free plan allows you to have up to 3 active projects with 2 additional editors and unlimited viewers.

Framer is most suitable for the prototype portion of your project. You can design the UI with a tool like Figma or Sketch and easily import it over to Framer to work on the prototype. Framer is especially a great option for web designers. 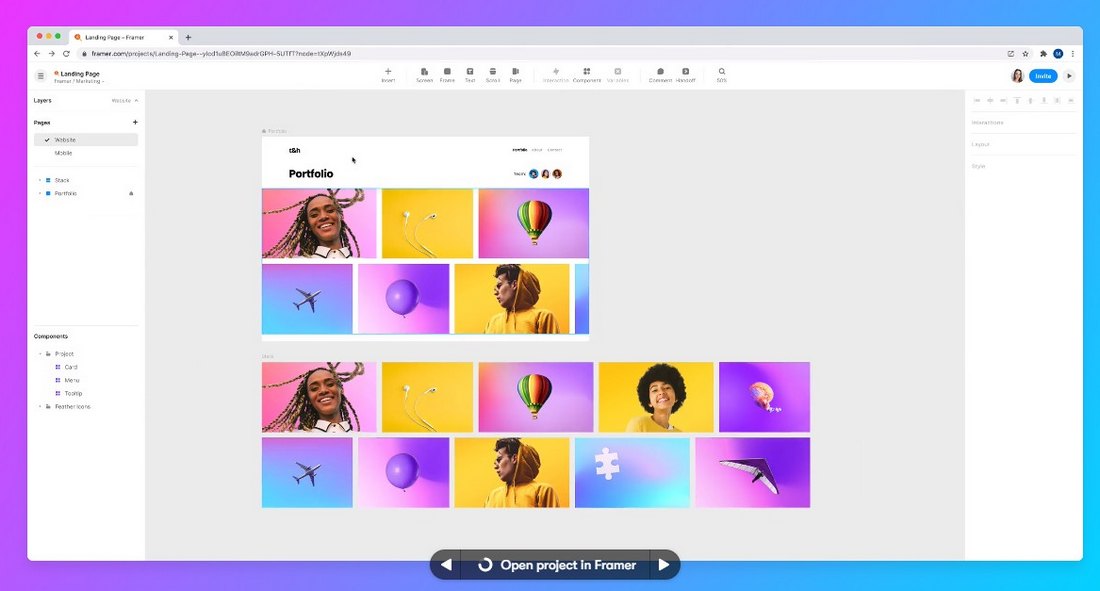 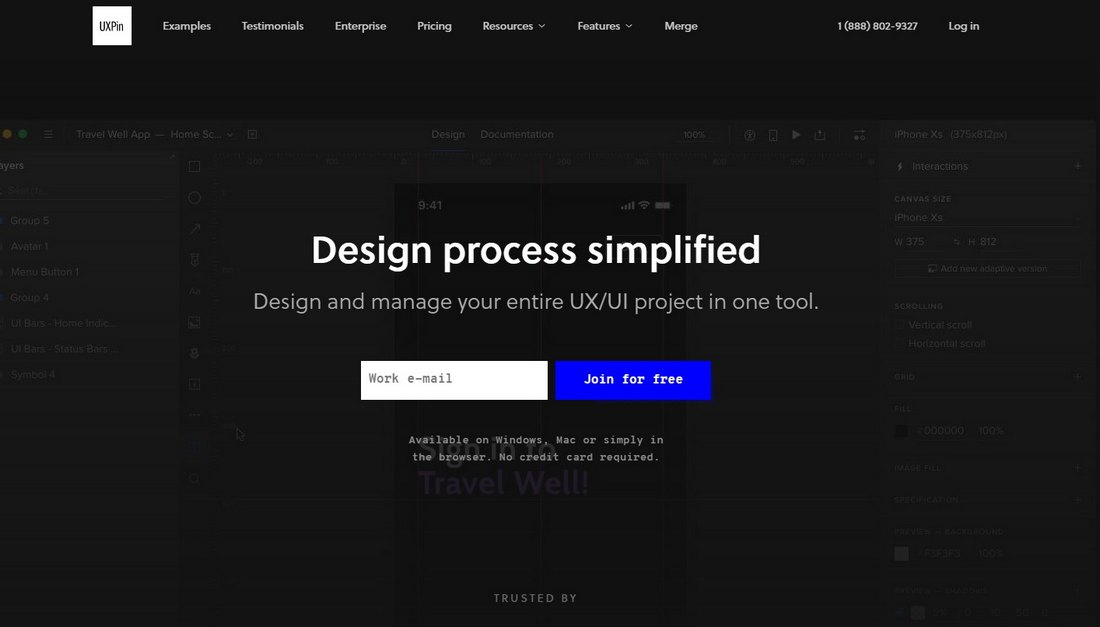 UXPin is the most advanced design and prototyping tool on our list. While you can use it for rapid prototyping, it’s most useful for crafting fully functional prototypes.

With UXPin, you can also have unlimited prototypes and reviewers. There is also a very limited free version you can use to test the app. Read more about UXPin in our hands-on review. 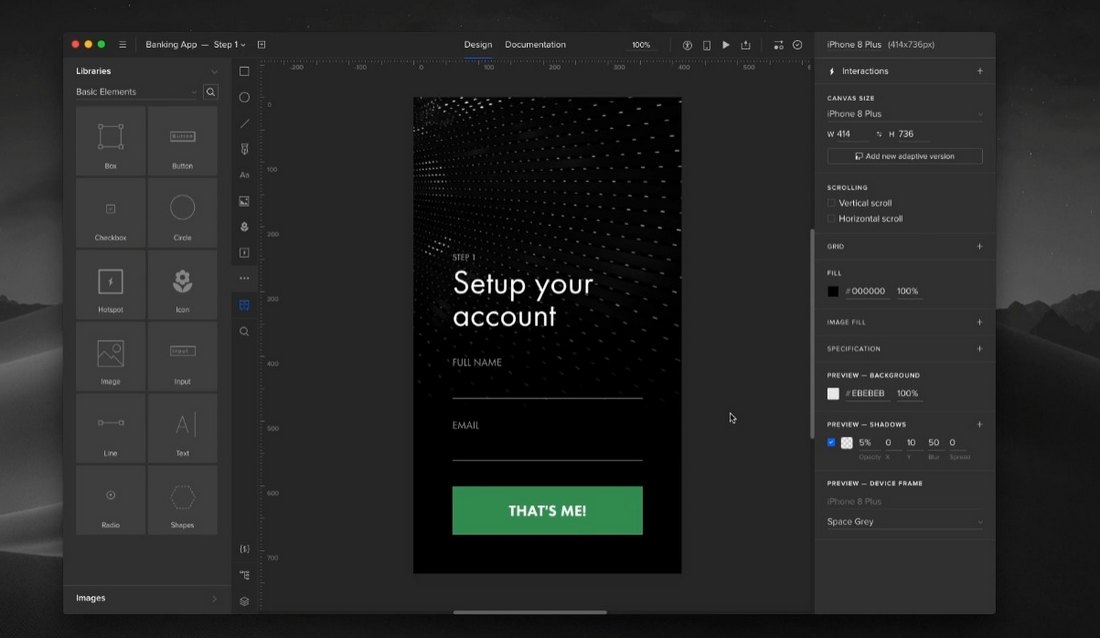 Here are a few tips you can follow to make sure to stay on track.

Have a Clear Idea

Before you start working on the prototype, remember to have a clear idea of what you want to achieve.

If it’s a user interface, work on the design using a separate app to have a clear outline. Or use a wireframe. And then move it over to the prototyping tool.

If you’re trying to gather feedback or solve an issue, have a clear goal in mind on how to approach the solution. And then implement it using the prototyping tool.

Keep it Simple and Fast

Stick to a basic and simple design. Don’t overcomplicate things by trying to make realistic prototypes.

Rapid prototyping is all about saving time. You don’t have to put more effort into the design aspect of the process.

Work With Your Team

If you’re working with a team, coordinate the prototyping process to have everyone involved. With the right prototyping tool, it will be easy to work together seamlessly.

Testing is a big part of the prototyping process. Get your team’s feedback first, then from users, and finally from clients.

Always gather feedback before implementing any changes. And, of course, always test your fixes as well.

Rapid prototyping should be part of every designer’s workflow. With so many great free tools to choose from, it’s no longer a luxury. And you can craft prototypes without code as well. Make sure to test some of the tools and tips we shared when working on your next project.

Also, be sure to read out best prototyping tools guide to find apps for more complex projects.