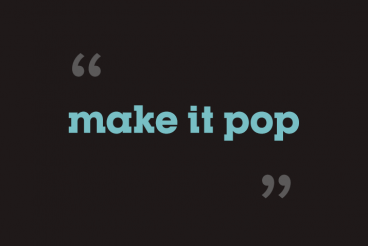 This is the third part in our series all about making fun of design related clichés that drive us all crazy. We put out the word on Twitter and asked for some of the worst things that you hear again and again from clients. The following are some of our favorites!

We’ve already picked on designers plenty with 5 Former Design Trends That Aren’t Cool Anymore and 5 Cliché Logo Design Trends to Avoid, now it’s time to turn around and give some attention to all the crazy things that clients say to their designers. There’s no shortage of cliches to choose from!

“Make it pop” has to be the most cliché overused line in design history. I’m not sure who decided that this is the best way to request more emphasis on a given element, but somehow it made its way into the official client handbook.

I swear, some people are convinced that there is a big fat “POP” button in Photoshop just waiting to be pressed. “You mean you didn’t press the pop button? Back to your lab minion!”

One of the biggest problems with this phrase is how most clients want the “pop” to be executed: via a burst, crazy ugly colors or some stock photo that has zero relevance to the communication in question. If you absolutely must tell your designer that you want something to pop, at least consider letting him/her decide how that goal should be accomplished.

Seriously, can you think of a more ridiculous thing to say to a designer? I submit that there isn’t one. What are these juices and why are they so… juicy? It’s as if we expect designers to begin secreting some strange, fruity liquid that upon application turns boring old Helvetica into something more exciting like Comic Sans. “Go go gadget creative juices!”

I’d even go a step further and say that discussing someone’s juices sounds more like sexual harassment than creative feedback. Say this a few times to your designer and the only thing that will be flowing is the copious amounts of alcohol he or she has to consume to forget that you ever uttered such an abomination.

Feel Free to Just Be Creative

Designers love it when you tell them to be creative, seriously, do it every chance you get. While you’re at it, the next time you get in a cab, tell the driver to feel free to just… drive.

The assumption here is that you have to give a designer permission to do something creative. Isn’t that what you hired them for? If you neglected to provide this nugget of wisdom would the designer cease all creative juice secretion and provide you with a Word Document set in Times New Roman?

Take It To The Next Level

Feedback like this is as much the fault of designers as it is clients. Too many designers become so emotionally connected to their work that they simply can’t handle criticism without feeling like they’re undergoing a personal attack. As a result, clients have had to resort to “nicer” ways to tell us that our work sucks. “This is great, but let’s take it to the next level.” Translation: “I don’t like it.”

“Take it to the next level” is an empty phrase to designers (plus, it sounds like you’re asking to move in). They’ve given you their best guess at what you want, now it’s time to say exactly what’s not working and why so you can avoid thirty rounds of guessing game artwork changes. Give open, honest and professional feedback that cuts to the heart of the issue. If your designer can’t take it, then it might be time for a new one.

This Project Will Get You Great Exposure

There’s nothing better than a client trying to convince you to take a low or even nonexistent rate because the project will surely earn you some great exposure or provide an awesome portfolio piece. While you’re at it, the next time you go into a restaurant, ask the chef to make you some free food in exchange for you telling all three of your close friends that it was delicious.

There are in fact some projects that are worth it solely for the exposure they provide. The best part is though that those types of clients always have a nice big budget!

This Project Will Lead to Paid Work

Once again, I beg you to go and try this with any other product or service. Perhaps I’ll walk into the Apple Store and ask for a free iPad with the guarantee that if I like it, I’ll actually purchase some Apple products in the future. Somehow I don’t think the folks at the Genius Bar will go for it.

For some reason designers exude some sort of “sucker” hormone that attracts penniless zombies looking for a free meal. The reality here is basically the same as the last time, if you don’t have any money, you can’t hire a professional. It’s simply a matter of respect. If you really stop and think about it you’ll no doubt realize that designers are real people trying to pay their mortgages and put food on the table for their families. Empty client promises don’t buy Happy Meals.

I’ll Send You a Fax

Sorry McFly, I don’t know what time warp you just stepped out of but turn down the Walkman and look around. No one uses a fax machine anymore. In fact, if you’re working with a freelance designer, there’s a good chance that they don’t even have a working phone line in their house.

It’s amazing how poorly this knowledge is disseminated in the general public, but designers aren’t actually supposed to just rip off the work of others. It seems simple enough right? You only have to take the color scheme, layout, buttons and graphics from this website, we can put our own logo on it and it’ll be different!

As Curebit just found out after stealing the Highrise site from 37signals, this strategy doesn’t work out so well in the long run and can lead to some massive PR headaches.

This one is so popular that it has spurred countless Internet memes, from Make My Logo Bigger Cream to the Make the Logo Bigger Song.

I’m not going to tell you that there is never a case when your logo needs to be bigger, because such instances do exist, just know that if you request it, your snarky designer is likely to send you back one of the links above.

For some reason, non-designers often imagine that they are qualified to make accurate time estimates for how long a design project will take. Experienced designers long ago learned to ignore any late night client phone calls because they inevitably lead to a request for a quick fix to a website or brochure. Five hours and nine phone calls later as the sun is rising the “quick fix” is finally wrapped up in time to start a new day of work.

Even worse than the quick changes to existing projects are the judgements received when a designer tells a potential client just how many hours of work to expect on a project. “It’s just a logo! You’re a professional, I don’t see why this should take you more than an hour.” Some clients are convinced that logos just pop out of Adobe Illustrator if you know the right keyboard shortcuts.

What Do Your Clients Say?

It’s always fun to gather around the metaphorical water cooler and jest about the lighter side of our profession. Join in the fun and share a tweet with some of your client horror stories. Have you heard any of the phrases above lately? What other client clichés can you think of?